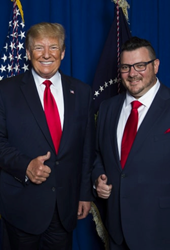 Achieving one billion views on YouTube despite the rapidly changing landscape controlled by faceless algorithms is significant.

Since 2012, Gary Franchi has worked diligently on creating and developing a conservative news channel to deliver Americans the truth. With countless interviews, features, breaking news stories sprinkled with comedic relief, Next News Network has become America’s favorite conservative news and opinion YouTube channel. Proof of this lies in the numbers, as Next News Network surpassed one billion views this week, which comes as no surprise with their steadily growing numbers.

Approaching 1.3 million subscribers, The Next News Network is the top YouTube news and opinion channel that never leaves Americans in the dark.

With the 2020 election ahead, Franchi says “I am looking forward to participating in our democratic process through the rights our Founders enshrined in the First Amendment while battling the Left's efforts to stifle conservative voices.”

Censorship is no stranger to Franchi. In November of 2017 he noticed an overnight drop in views he attributed to a change in the YouTube algorithm. As his views plummeted by nearly 80% he noticed "corporate approved" youtube news channels views skyrocket.

During the 2016 election the Next News Network was the number one youtube channel out performing CNN, FOX NEWS, MSNBC, CBS, ABC and others. Vowing to prevent independent creators from ever dominating the news space on YouTube again, YouTube modified their algorithm to surface "authoritative news" in search results.

Franchi continued, "The other news channels were not even paying attention to YouTube then, we smoked them all, we even beat Hillary and Obama's YouTube channels!"

He went on to say, "Because of our successful application of the First Amendment on YouTube, and the resulting election of Donald J. Trump, YouTube decided to change the algorithm to prevent that from happening again. In my opinion that is clear cut election meddling."

He was positive nonetheless and stated, “Achieving one billion views on YouTube, despite the rapidly changing landscape controlled by faceless algorithms, is significant.”

Remarking on why he began the YouTube channel he said, "I started the Next News Network after I saw my 2012 candidate, Ron Paul, so brutally treated by the media and his own party. I vowed to never let that happen again by using the free press to support my candidate in 2016. We were successful, and were instrumental in the election of our next president Donald J. Trump."

With this goal in mind, Gary Franchi created Next News Network to ensure the free press would continue to thrive online and serve millions of Americans and viewers across the world. Franchi is a conservative community pillar and a great example of creating a solution to a problem instead of leaving it up to someone else.

About The Next News Network