The Thoughtlessness Of Overthinking: New Study Reveals The Disadvantages Of Extreme Rumination

A new study by PsychTests.com indicates that ruminators are not only less happy, they are also less resilient and have very poor self-esteem. 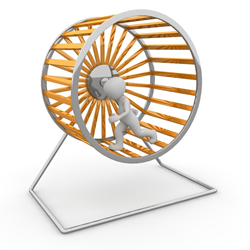 A ruminators mind is filled with an endless parade of negative thoughts and worries.

Ruminators analyze situations so pedantically, they make them a lot worse in their minds than they are in reality.

We have turned #FAIL into fun. We glorify the folly of amateur stuntmen who ride their bicycles off roofs, intentionally electrocute themselves, and who walk (or rather stumble) along the fine line between bravery and absurdity. Thoughtlessness, it seems, is entertaining. The other end of the spectrum, however, is far more somber. Research from PsychTests reveals that people who think too much live a life of constant fear and stress, worrying about a seemingly endless array of what-ifs.

PsychTests divided a sample of 2,608 people who took the Emotional Intelligence Test into 1,319 ruminators and 1,289 non-ruminators. Ruminators are people who tend to over-think and over-analyze a distressful issue to the point where it occupies their thoughts excessively. Researchers found significant and alarming differences on a number of factors. (Note: scores below range on a scale from 0 to 100).

Perhaps not surprisingly, ruminators are much less content with their life. They are often so focused on everything that could possibly go wrong, they have no time to pay attention to what’s going right.

Ruminators have a lot of difficulty managing their emotions. The endless rampage of negative thoughts creates an upsurge of stress-related emotions, and scattered, wild thinking leads to scattered, wild emotions. When a person doesn’t make it a point to consciously choose his or her thoughts, it causes a chain reaction where emotions become difficult to control.

The basis of rumination for many people is the belief that they don’t have what it takes to deal with an issue. Similarly, the basis of poor self-esteem is an inability to recognize one’s value and power. If a person has low self-esteem, there’s a good chance he or she is also going to be a ruminator.

Ruminators tend to have a lot of difficulty motivating themselves to take action, often because they are simply unsure what is the right thing to do. They may jump from one concern to another, one possible solution to another, poking holes in everything until they sink in their worries. It’s really difficult to take action when a person endlessly analyzes its viability, leading to indecisiveness.

When ruminators spend more time imagining worst-case scenarios or focusing on the bad side of a situation, it makes it extremely challenging to visualize or anticipate a positive outcome. With constant worries, fears, and self-deprecation taking over their thoughts, ruminators are more likely to become pessimists.

Ruminators tend to hold a lot back. There are likely a lot of things they wish they could say but don’t, for fear of rocking the boat or of causing irreparable damage to a relationship. Some may re-create an argument in their heads, playing it over and over, saying all they wanted to say but never quite achieving that elusive feeling of catharsis or closure.

In spite of the fact they think about their problems a great deal, ruminators are not really facing their problems head-on or handling them in a manner conducive to resolution. Moreover, when something is bothering them or stressing them out, it’s all they think about. Unfortunately, resilience can only be developed by overcoming hardship and learning from it, which cannot happen when they keep running around in a vicious circle.

While ruminators may dislike a person for saying something hurtful (and will obsess over it for quite some time), deep down they still desire approval. Like most people, ruminators want to be liked. This is often why even lighthearted barbs tend to cut them deep.

“Ruminators have an obsessive mind,” explains Dr. Jerabek, president of PsychTests. “They can think about a problem for hours and still feel like the issue is not resolved, or over-analyze situations, finding problems that don’t really exist. This often leads to sleepless nights spent thinking incessantly about anything and everything. As you can imagine, this takes a significant toll on a person’s peace of mind and mental health, leading to issues like anxiety, depression, and insomnia. Ruminators analyze situations so pedantically they make them a lot worse in their minds than they are in reality.”

“Going through life without thinking things through is rather foolish and potentially dangerous, but over-thinking can actually be just as detrimental. At most, it offers a false sense of control, because while looking at a problem from different angles may yield a good solution, ruminators try to account for every worst-case scenario possible - often elaborate ones which are unlikely to happen. This only leads to more worries, and decisions made out of fear are unlikely to work out well.”

Want to assess your EQ? Check out https://testyourself.psychtests.com/testid/3979
Professional users of this test can request a free demo for this or any other assessments from ARCH Profile’s extensive battery: http://hrtests.archprofile.com/testdrive_gen_1