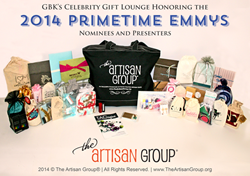 “We love helping our small business members by getting their handcrafted products into the hands of celebrities and press members.

The Artisan Group® (http://www.theartisangroup.org) delighted celebrities, VIPs and members of the press stopping by GBK’s Luxury Gift Lounge Honoring the 2014 Primetime Emmys Nominees & Presenters. It presented an eye-catching exhibit and offered its signature black swag bag filled to the brim with a diverse selection of handcrafted goods from participating members. The Gift Lounge took place August 22-23, 2014 at the L’Ermitage Hotel in Beverly Hills, California.

"As always, Gavin Keilly and the GBK staff set us up for a very successful gift lounge," said The Artisan Group founder Valerie Guerrero. "Our members look forward to GBK’s Primetime Emmys Gift Lounge each year with great anticipation, knowing they will have a chance to get their beautiful handcrafted products in front of Hollywood’s best and brightest.”

Stopping by The Artisan Group’s exhibit were cast members from “Orange is the New Black,” “Breaking Bad,” “Mad Men,” “Fargo,” “True Blood,” "Ray Donovan,” "So You Think You Can Dance," and “Dancing with the Stars,” among many others.

Those individuals wishing to view all the products gifted to celebrities attending the event can review The Artisan Group’s Event Gift Guide on issuu.

To learn more about The Artisan Group’s support of the handcrafted movement, its membership and its charitable contributions, read TAGazine | VOL. 2.

ABOUT THE ARTISAN GROUP®
The Artisan Group (http://www.theartisangroup.org) is the premiere entertainment marketing organization representing talented small business artisans at the best celebrity gift lounges. The organization provides a collective sampling of handcrafted products to celebrities and members of the press at top luxury gift lounges such as those leading up to The Academy Awards, The Golden Globes, The MTV Movie Awards and The Primetime Emmys. The Artisan Group also coordinates product placement of its members' handcrafted products on such hit television shows as "Rizzoli & Isles", "The Young & The Restless", "The Voice", "The Vampire Diaries," "Parenthood" and "Scandal", among others. Membership in The Artisan Group is juried and by invitation only.