The Blu Phenomenon book launch at the nation’s largest private Asian library on January 8, 2016. New book inspires discussion on how international adoption is changing our communities and a ready force for global political change.http://thebluphenomenon.com 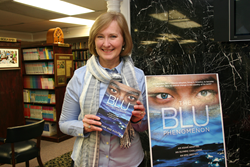 Author Catherine Pike Plough, at her Book Launch at the largest Asian Library in the U.S.

This story portrays how China’s democratic movement might be globalized as a result of adoption and Chinese emigration… The Blu Phenomenon conveys a hope that the people of China will yet dream of ‘change. Harry Wu, Human Rights Activist

The year 2014 closed with discussions around the globe regarding changes on the international adoption scene. For example, China recently extended its one-child rule to two, which is expected to impact the number of children available for adoption from China. And China is only one of a number of countries that are reexamining their guidelines for sending children to homes overseas. Policy change going forward, however, doesn’t alter the fact that the US is already home to hundreds of thousands of children adopted internationally—mostly from China.

A fresh perspective on the topic has emerged this month in the form of a young adult novel called The Blu Phenomenon, written by Catherine Pike Plough, a Charlotte author and the adoptive mother of a Chinese son. Early reviews and impressive endorsements for the book suggest Plough’s macro-view of the adoption movement over decades is inspiring a different discussion: How international adoptees just may be a latent power for political change abroad. The Blu Phenomenon released last week to all major book distributors. http://thebluphenomenon.com

“My goal is to give those touched by adoption a familiar place where they can embrace their journey,” says Plough of her first novel, adding, “and to deliver that experience in a plausible, suspense-filled story with young adult appeal.” The main character of the book is a thirteen-year-old Chinese adoptee, living in California, with extraordinary athlete abilities and unexplained blue eyes. On his journey to the Olympic Games, he is nicknamed Blu.

When Plough talks about “those touched by adoption,” she says that includes most everyone. “Adoption, particularly international adoption (IA), has changed the landscape of the U.S.,” states Plough. According to the Bureau of Consular Affairs, just since 2000, the number of international adoptions ranged from an annual high of nearly 23,000 (2005) to a low of just under 7100 (2013). “The unique opportunities and challenges of this phenomenon have impacted families, communities, churches, schools, and our health care industry,” adds Plough. The Blu Phenomenon, she says, is a “what if” thriller that acknowledges the impact of IA, and dares pose the idea that Chinese adoptees—together with the hundreds of thousands of students from China who study in U.S. universities—just might hold the power to push for change in their Communist homeland.

Foremost human rights activist for China and founder of the Laogai (China’s Labor Camps) Research Foundation in Washington, D.C., Harry Wu support’s Plough’s assertion. In his endorsement, carried on the back of the book jacket, Wu writes, “This story portrays how China’s democratic movement might be globalized as a result of adoption and Chinese emigration… The Blu Phenomenon conveys a hope that the people of China will yet dream of ‘change.’” In addition, the book has won the favor of Susan Soonkeum Cox, a Korean adoptee and Vice President of Policy and External Affairs at Holt International Children’s Services. A public voice for adoption-related concerns, Cox offered this commentary on the book: “An engaging read for all young adults … In particular, Asian and transracial adoptees will find that the cultural complexity presented will resonate with them in a deeply personal and profound way.”

About the Author
Catherine Pike Plough is a veteran writer who began her career as a news journalist. For over two decades, Plough has written articles for regional and national publications, as well as web content for corporate and non-profit entities. In addition, she took first place in Charisma’s short fiction competition. The author is available for speaking engagements (visit TheBluPhenomenon.com) and seeks to connect with organizations involved with adoption and/or Asian-American interests to partner in growing the IA discussion.

About the Book Launch
A book launch for The Blu Phenomenon was held on January 8, 2016 at the Asian Herald Library in Charlotte, NC. It is the largest privately owned Asian library in the nation. At the event, library founder and a national leader in the Asian community Dr. Ki Hyun Chun was presented a copy of book for the library. Chun is also founder of the Carolinas Asian-American Chamber of Commerce, The Chun Group CPA, and The Asian Herald Newspaper.

Korean adoptee Susan Soonkeum Cox of Holt International Children’s Services is a public voice on issues related to international adoption and an endorser of The Blu Phenomenon.

At a her book launch event at the Asian Herald Library in Charlotte, author of The Blu Phenomenon, Catherine Pike Plough, presented her book to library founders and Asian community leaders the Chuns.