Linwood Peel's Tribute to The Drifters Back on Tour Spring 2014

Exclusively represented by music agency Mark Sonder Productions, the "On Broadway Tour" is available for corporate, association, and concert work. 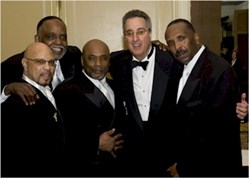 Mark Sonder, MM, CSEP and Chief Entertainment Officer at the award winning music and talent agency Mark Sonder Productions, Inc. announced that the LPS Drifters will be performing their Top 40 hits including: "Stand By Me," "On Broadway," "Under The Boardwalk," "This Magic Moment," "Up on the Roof," and many others in their 2014 On Broadway Tour.

Numerous meetings, conventions, trade shows and special events have already been booked. They will also be engaged for public concerts and performing arts centers around the USA.

Large market locations that they have booked for their 2014 tour include the New York City and Baltimore/DC metro areas plus Orlando, Las Vegas and San Diego/LA as well. Call today to book your special event.

What are people saying about the LPS Drifters?

About Mark Sonder Productions, Inc.
Created in 1985 to fill a growing need for music, entertainment, speakers, headline entertainers and supportive production in corporate and association meetings, conventions and special events plus facilities, casinos and concerts, the company 29 years later has worked in the USA, Canada, Mexico, South America and Europe.