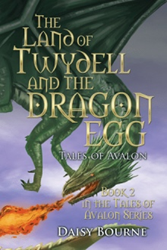 Daisy Bourne returns to the literary limelight with the second book of the “Tales of Avalon” series, charting the tale of the mighty sorcerer Merlin as he restores peace in a neighbouring land. “The Land of Twydell and the Dragon Egg: Book 2 in the Tales of Avalon Series” (published by AuthorHouse UK) is a “unique take” on the Arthurian legend, seamlessly weaved with new twists and special characters. Originally published in September of 2016, a new marketing campaign is set for this second installment of “The Tales of Avalon Series” to coincide with the launch of her new website.

Like its predecessor, this the second book in “The Tales of Avalon Series” has received positive reviews including the 4 star silver seal from the Pacific Book Reviews. “The Land of Twydell and the Dragon Egg” also achieved finalist status in the 2017 Eric Hoffer Awards.

Merlin the wizard is an adventurer. He sets off on his broomstick to explore the country bordering Avalon and finds himself in the land of Twydell. He finds that, unlike Avalon, magical beings are not welcome there, and angry dragons are attacking the capital. Giving his word to King Frederrick, Merlin, who has experience of dragons, sets off to find out why the formerly peaceful dragons have suddenly started to assault the Twydellers. An unexpected adventure brings him into contact with an old friend and many new ones.

Bourne on her aim for penning this tale: “As a Briton, I dearly want the Arthurian legends to stay alive. I want to create new stories which will make the world of wizards, dragons and unicorns as enchanting as ever!”

With the appeal of the “Harry Potter” series and “The Lord of the Rings” trilogy, Bourne hopes “The Land of Twydell and the Dragon Egg” is a delightful and exciting read for both parents and their children. A snippet from the book reads: Merlin was resting with other folk on the town’s walls when he heard the warning blast of a guardsman’s horn. Terrified people ran for cover, and children screamed. Merlin turned to see a large green dragon in the distance, heading towards the city. He placed his staff in the long hidden pocket inside his travelling gown, and then mounted his broomstick. The old wizard soared high in the air, flying his borrowed broom in the direction of the oncoming dragon.

About the Author
The author is proud to use her mother’s birth name as a pseudonym when writing “The Tales of Avalon Series.” Daisy Bourne was born in England, in 1917. Nothing much is known about her real parents, except that their lives were changed dramatically by World War I. At the age of 6, Bourne was unofficially adopted and her name changed. The child was taken to Canada. There are several similarities between the real Bourne and her namesake in the book. The author’s ambition is to one day write the story of the real Daisy Bourne. In the meantime, she is working to complete the other seven books in “The Tales of Avalon Series.”