This Veteran’s Day, Advance Relocation Systems Is Celebrating Our Relationship with the U.S Military

As we celebrate another Veteran’s Day, Advance Relocation Systems is encouraging us to reflect on the long road to freedom, and the brave servicemen and women who have given their lives and still walk that path to keep it clear today. 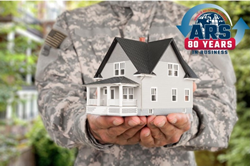 Advance Relocation Systems Is Celebrating Our Relationship with the U.S Military

“The service members that we’re providing our service to, the sacrifices that they are making for all of us and to be part of the system that helps move them around the country and around the world is very important to us, as is providing outstanding quality .” - Dalton Conklin, ARS President.

Each year, we celebrate Veteran’s Day to commemorate and honor the brave women and men who fought the struggle to make our country free. When we think about freedom, it’s hard not to think about the long and arduous struggle it took to get it and the challenges we’ve faced to keep it. Many lives have been lost along the way and even today, the men and women of our military are fighting to maintain it. Our military personnel are often faced with constant moving/relocation as part of their career. While relocation is a bit different for military families than it is for civilian families, both types of moves are important to the team at Advance Relocation Systems.

During the year, millions of families relocate. Summer is the most common time for relocation, as such, it is known as peak-moving season, which stretches from Memorial Day to Labor Day. This period is a popular choice for many people who are relocating because of the warm weather and the desire to get settled in before the new school year begins. Other common reasons for a summer move include kids going off to college and relocating for work. According to the U.S. Census Bureau, every year between 42 and 43 million people relocate, and about 80% of those moves occur during the summer alone! The United States Armed Forces orchestrates between 420,000 and 450,000 Permanent Change of Station (PCS) moves for military families annually, and about 40% of those relocations happen during the summer.

When it comes to military families, the decision-making process is different but the logistics are the same. Many of our servicemen and women receive orders for their new assignments in the spring and early summer, allowing them to complete their moves in time for their children to begin the school year with their new classmates. Military families aren’t able to control how often they move or how long their service member will be deployed. Moving by itself can be extremely stressful, and having to move every few years can be really hard on families.

It’s easy to see the downside of having to move so often, but there are positive aspects, too. Meeting new people and experiencing different cultures offer a broader perspective and a greater appreciation for home. Advance Relocation Systems want our military families to focus on the positives of moving, not the negatives, which is why they aim to make the relocation process as stress-free as possible. As an Atlas Agent, they have a wide variety of resources, beyond that of most moving companies. With a fleet of more than 50 moving vans and an energy-efficient, sustainable 62,000-square-foot warehouse/storage facility, they have the capacity needed to take good care of your property while it’s in their possession. Their team of over 150 strong individuals boasts several veterans so they have some firsthand knowledge of the needs of military customers.

For most moving companies, military moves aren’t the most desirable because they aren’t as profitable as regular household moves. At Advance Relocation Systems, they choose to see military moves differently. They have an entire division of their team that is dedicated to making the relocation process easier for the men and women who serve our nation. They’ve won the bid for multiple contracts to move military families across all of the service domains. They are dedicated to finding different ways to give back to the community and show appreciation for the people who choose to move with them. Hiring veterans is just one of those ways they show appreciation. They consider it a privilege to relocate military families with great care and minimize their stress as they serve and protect our great nation.

“The service members that we’re providing our service to, the sacrifices that they are making for all of us and to be part of the system that helps move them around the country and around the world is very important to us, as is providing outstanding quality to these people.” - Dalton Conklin, ARS President.

This Veteran’s Day, let’s take a moment to honor our fallen soldiers and to appreciate our military personnel and all that they sacrifice on our behalf. It’s a good time to remember that they are asked to uproot their lives and families often to continue to serve where needed. At Advance Relocation Systems, they are doing their part by safely moving these families, and we encourage you to think of small acts of kindness you can do to make them feel welcome when they move into your community.