Respected Western artist, Robert Goldman, has created a stunning new exhibit of 40 oils depicting "A New Perspective" of key sites of John Wesley Powell's expeditions on the Colorado and Green Rivers beginning in 1869. 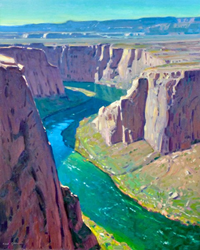 A Powell Expedition Anniversary Reception will take place May 18, from 6 – 9 p.m. at the museum and serve as the grand opening for Goldman’s exhibit of 40 vivid paintings.

The Thunderbird Foundation for the Arts, operators of the historic Maynard Dixon Living History Museum in Mt. Carmel, Utah, will debut an exciting new fine art exhibit featuring the work of nationally-respected artist Robert Goldman as part of a May 18 celebration marking the 150-year anniversary of John Wesley Powell’s historic 1869 expedition exploring the Green and Colorado Rivers.

“In the 1870’s artist Thomas Moran joined Powell on his explorations of the Southwest and created a breathtaking body of work that showcased landscapes that had never been seen by anyone outside of the region,” said Paul O. Bingham, art dealer and executive director of the Thunderbird Foundation. “Much has changed since then, which is why we commissioned the talented Robert Goldman to explore some of those same sites and create “A New Perspective” of this rugged area of the American West.

A Powell Expedition Anniversary Reception will take place May 18, from 6 – 9 p.m. at the museum and serve as the grand opening for Goldman’s exhibit of 40 vivid paintings. The reception will cap off a day-long event honoring Powell’s exploration and the Southern Paiutes who were extremely important in helping Powell’s party survive in the harsh conditions of the region.

“I was so honored when Paul Bingham, who has been an art dealer for 50 years and represented Maynard Dixon, contacted me in Sept. 2018 about a show related to the 150th anniversary of Powell’s adventure,” said Goldman. “I didn’t want to let them down, so I devoted 100 percent of my time over nine months to the project. Sometimes getting up 3 a.m. to paint.”

“First, I took a trip to Green River, Wyoming where Powell’s journey began,” said Goldman. “I was particularly intrigued by a prominent butte there by the Green, which had been painted early on by Thomas Moran.” Goldman captured new viewpoints of the Green and Colorado Rivers using a drone and he used a helicopter to gain new perspectives of the Grand Canyon and areas around Page, Arizona, including the Colorado River Horseshoe Bend, the Glen Canyon Dam and Lake Powell.

“Powell also spent time near Mt. Carmel, Utah, so I researched Barracks Canyon and Zion National Park,” added Goldman. He finished up in Gallup New Mexico where Powell had seen red sandstone cliffs and the rock formation then known as the Navajo Church.

Goldman will share the full story of his adventures in creating his paintings, on May 18, at 11 a.m. at the Old Rock Church in Mt. Carmel. Goldman grew up in Southern California with his brother Ken, another well-known artist, and has shown his work in San Diego. After living 20 years in Tucson, and now in Prescott, AZ., Goldman learned to appreciate the more austere environments of the West. He is one of a select few artists invited to participate annually in the Grand Canyon Celebration of Art, where his paintings are shown in the Kolb Studio on the South Rim of the park.

To further commemorate Powell’s explorations and the Southern Paiutes, the Thunderbird Foundation and Git ‘er Done Books published a new book written by Carol Ormond, “The People: The Missing Piece of John Wesley Powell’s Expeditions, A Photographic History of the Southern Paiute Tribes”. The book features 116 original albumen photographs taken during Powell expeditions between 1872 and 1875, which depict Southern Paiutes and other Native Americans in the region surrounding Powell’s base camp in Kanab, Utah. The actual prints are only available for viewing at the Maynard Dixon Museum and the Smithsonian in Washington D.C. There will be a book signing and symposium by Ormond on May 18, at 1 p.m. in Mt. Carmel.

For the latest information about The Thunderbird Foundation’s May 18 celebration visit https://www.thunderbirdfoundation.com/.

About The Thunderbird Foundation
The Thunderbird Foundation is a 501(c)3 non-profit organization. Since 1999, the Thunderbird Foundation for the Arts has been committed to preserving Maynard Dixon’s Utah property and educating the public about his contributions to American art through educational tours, internships for working artists, art workshops and day camps for people with special needs, and a vigorous artist retreat program. Gifts to The Foundation may be made in cash, securities, art, real estate, and other forms of personal property. Naming and memorial giving opportunities are available as well. Gifts may be made either unrestricted or directed specifically to the needs of the foundation or goals of the donor. Additionally, deferred giving options are available which may provide significant income and tax benefits to the donor(s).

“The Mother”: Photo taken by John Hillers (ca. 1872-1875), of a “Pai-ute” Indian mother and her child living on the Kaibab Plateau near Grand Canyon in Northern Arizona, (as originally described).Original photo is now on exhibit at the historic Maynard Dixon Home in Mt. Carmel, Utah.