“To Walk on Water” from Christian Faith Publishing author Timothy Paul Neller is a moving account that reveals the journey of Terry as he deals with the struggles and challenges of his newfound faith; and his girlfriend, Jenny, who is also in doubt with her faith. 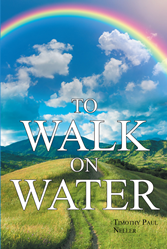 “To Walk on Water”: a fascinating novel holding a story that deals with faith and the doubts that shadow it in times of tribulations. “To Walk on Water” is the creation of published author Timothy Paul Neller, a teacher, assistant principal, principal, director, and professor during his forty years in the field of education. He is passionate in arts and was actively involved in the Tulsa Bach Chorale as a singer and in community theater as an actor. His play, Horace and Daphne, was performed at the Performing Arts Center of Tulsa in both 2003 and 2011.

Neller shares, “Terry thought that his life would change drastically when he became a Christian, and it did, but not in the way that he thought it would. Instead of life being easier, it became much harder, each day filled with temptations that were challenges to his newfound faith. His feelings about himself and those around him intensified, and when he felt himself sliding back into his old habits, his closest friends, Lolly and Nick, assured him that they were always there to support him, urged him not to lose his faith, and reminded that God would always give him the strength and wisdom to handle any problem. He wasn’t so sure about that when his girlfriend Jenny came back from New York City after trying out for the New York Ballet and would no longer talk to him.

“After her trip to New York, Jenny too was struggling with her faith and began to question whether or not God even existed. She shut herself off from those around her, began to hate her father, and felt hopelessly lost. It was only through her friend, Lolly, that she again began to see things more clearly. But Terry continued to struggle, and it was only when the lives of all his friends had been threatened and he seemed to have lost everything did he come to know God and to understand his true purpose.”

Published by Christian Faith Publishing, Timothy Paul Neller’s new book shares a captivating walk of a person whose faith was tested several times, yet readers will witness how God saw him through it all.

View a synopsis of “To Walk On Water” on YouTube.

Consumers can purchase “To Walk On Water” at traditional brick & mortar bookstores, or online at Amazon.com, Apple iTunes store, or Barnes and Noble.

For additional information or inquiries about “To Walk On Water,” contact the Christian Faith Publishing media department at 866-554-0919.