A new study by PsychTests.com indicates that women who had tomboyish tendencies as a child are more likely to adopt modern gender role beliefs regarding how they raise their children. 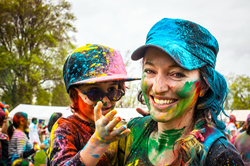 Girls who grew up as tomboys are more likely to eschew traditional views of womanhood and motherhood.

We are ushering in new, more varied views of what it means to be a woman and a mom, and not just in Western countries.

Not all women envision themselves as June Cleaver-esque moms, with the spotless homes, perfectly coiffed hair (no messy buns here), and freshly baked cookies. Granted, some women still embrace traditional views on parenting, but recent research from PsychTests indicates that modern women, particularly those who grew up as “tomboys,” are giving the boot to conventional gender role views on how to raise their kids, and casting aside gender stereotypes regarding how boys and girls should behave.

Analyzing data from 5,437 women who took the Gender Roles Test, PsychTests’ researchers compared two unique groups of women: Those with “tomboy” tendencies and those who are/were more “girly”. Here’s how the two groups compared in terms of their attitudes towards parenting and gender stereotypes:

“We are ushering in new, more varied views of what it means to be a woman and a mom, and not just in Western countries,” explains Dr. Jerabek, president of PsychTests. “Even in traditionally patriarchal societies we are starting to see a shift, a revamp of the role of women in society. You can even see evidence of this on TV shows, where the depiction of moms is being completely redefined. The June-Cleaver-type moms are fading away; now we’re seeing corporate moms, single moms, and women who eschew motherhood completely. This doesn’t mean that every little tomboy will grow up to be a modern-thinking feminist; in fact, only 15% of the tomboys - and 13% of girly-girls - are involved in feminist causes. What our study has shown is that women who were given the freedom to explore interests beyond the dictates of gender stereotypes have developed a much broader, less limiting view of what it means to be a woman and mom. These women want to be, or already are, the type of moms who want their kids to grow up in a world where their possibilities are limitless.”

Professional users can request a free demo for this or other athletic assessments from ARCH Profile’s extensive battery: http://hrtests.archprofile.com/testdrive_gen_1

There’s something to be said for parents who raise their daughters to believe that their gender doesn’t limit their possibilities.Here’s how “tomboys” and “girly-girls” compare.