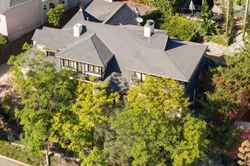 Rachel Hunter has re-listed her Hollywood Hills home for $3.499 million.

“Weeeell, Doggies! – Beverly Hillbillies Mansion Fetches $150 Million”
The over-the-top mansion seen in 'The Beverly Hillbillies' as the home of oil-rich Jed Clampett has sold for approximately $150 million. The 20,000-square-foot home on a bit over 10 acres has sold after several years on the market and set a new record for the most expensive home ever sold in California.

“Boris Johnson's 10 Downing Street”
England's Prime Minister Boris Johnson lives at 10 Downing Street, the official residence of the Prime Minister of Great Britain since 1735. Originally a medieval brewery, according to a local real estate agent, the home is worth about £5.3million ($7 million US). Or perhaps much higher due to its famous history.

“Brad & Jen's Newlywed Mansion”
It was going to be their forever love nest when Jennifer and Brad bought their mansion in Beverly Hills soon after their Malibu marriage. One of Southern California’s most romantic homes with canyon views, dreamy lighted pool, stone courtyard, multiple fireplaces including the bedroom, dining room and bar, outdoor living room and an outdoor bedroom over the tennis court. The A-list couple owned the home from 2001 to 2006 and it is once again on the market priced at $44.5 million.

“Sarah Palin Sells Arizona Home”
An Arizona home that was owned by an investment group with ties to Sarah Palin and was once rumored that she was moving there as a base for a presidential run has sold for $6.2 million.

“Home Prices Increase In Most of United States”
According to the National Association of Realtors, single-family home prices went up in 93% of 178 U.S. metro markets in the third quarter of 2019. Median home prices increased 5.1% from 2018 to $280,200.

“Aaron Paul's Spanish-Style Home”
'Breaking Bad' star Aaron Paul's Spanish-style home he bought in 2012 is on the market at $2.198 million. The 1930's home has three bedrooms and views that span to downtown Los Angeles. It also has a den, movie-screening room, bar, and an outdoor seating area with a fountain and firepit. Located above Sunset Strip near Chateau Marmont, Brad Pitt also once lived here.

“Katie Holmes' L.A. Home”
Katie Holmes has put her 6,040-square-foot L.A. home on the market at $4.625 million. The European-style home has six bedrooms, a pool, two courtyards and an outdoor kitchen. The Ohio-born Holmes spends most of her time in New York City.

“South Florida's Condo Inventory”
According to one expert on the Miami condo market, 90 percent of the new construction since 2012 has already been purchased. Expect a new cycle of Florida pre-construction condo sales to start next year with completion in 2025 or later.