Southwest Indiana is growing again with an announcement by Toyota Indiana of a $100 million investment to its Princeton plant adding 300 jobs to boost production of the Highlander Hybrid. 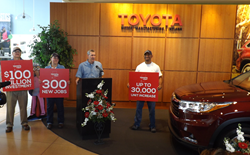 Hoosier-built products like the Toyota Highlander are known around the world for their precision and quality.

The regional economy is about to get a boost because Toyota Indiana is on the grow again. The plant will invest $100 million and add 300 jobs by summer 2016 to boost production of the popular Highlander midsize sport utility vehicle. This expansion will bring Toyota Indiana’s overall investment to $4 billion. This step allows Toyota to utilize existing capacity in North America while providing additional flexibility to adjust its product mix to meet changing customer demand.

Since production of the third-generation Highlander began in the Indiana plant in December 2013, sales have been strong. From January through July 2014, Toyota sold about 90,000 Highlanders, an increase of 16 percent over the same period the previous year.

Currently, Toyota Indiana builds the Highlander only in the West Plant alongside the Sequoia full-size sport utility vehicle. To meet increasing demand for Highlander, annual production of up to 30,000 of the midsize SUVs will be added to Toyota Indiana’s East Plant where the Sienna minivan is built.

“The Highlander has been a great product for our plant,” said Toyota Indiana President Norm Bafunno. “Establishing Highlander as the ‘bridge vehicle,’ as we call it, between the East and West plants increases our ability to meet customer needs for our outstanding products. This exciting news is a true testament to the capability of our hard-working and dedicated team members.”

Toyota Indiana, the sole producer of Highlander in North America, also exports it to Australia, New Zealand and Eastern Europe. Sienna is shipped to South Korea, Pacific islands and other countries, and the Sequoia is exported to the Middle East, making the Indiana plant a global supply base for SUVs and minivans.

“Indiana is a state that works when it comes to building the cars that keep America moving forward,” said Gov. Mike Pence. “Hoosier-built products like the Toyota Highlander are known around the world for their precision and quality. And with suppliers in all corners of the state, Toyota is helping to strengthen and grow Indiana’s economy.”

About Toyota
Toyota (NYSE:TM), the world's top automaker and creator of the Prius, is committed to building vehicles for the way people live through our Toyota, Lexus and Scion brands. Over the past 50 years, we have built more than 25 million cars and trucks in North America, where we operate 14 manufacturing plants (10 in the U.S.) and directly employ more than 40,000 people (more than 32,000 in the U.S.). Our 1,800 North American dealerships (1,500 in the U.S.) sold more than 2.5 million cars and trucks (more than 2.2 million in the U.S.) in 2013 – and about 80 percent of all Toyota vehicles sold over the past 20 years are still on the road today.

Toyota partners with philanthropic organizations across the country, with a focus on education, safety and the environment. As part of this commitment, we share the company’s extensive know-how garnered from building great cars and trucks to help community organizations and other nonprofits expand their ability to do good. For more information about Toyota, visit http://www.toyotanewsroom.com.