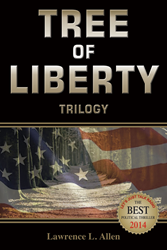 Our nation’s lack of leadership has left many feeling lost, even anxious about the direction the county is going.

“Tree of Liberty is hands down the most emotionally engaging and mesmerizing novel I’ve read in years, let alone 2014,” Kathryn Raaker announced on her Saturday show. Lawrence Allen is now a regular contributor to Kathryn Raaker’s think-tank of authors and experts, and frequently appears as a guest on her nationally syndicated TV and radio shows. Three film studios are currently reviewing Tree of Liberty for adaptation into a screenplay.

“A lot has happened in the eight months since Tree of Liberty was released. The attention it has received has been surprising,” Allen shared during a recent phone interview. “Our nation’s lack of leadership has left many feeling lost, even anxious about the direction the county is going. There is a sense of foreboding out there and in a way Tree of Liberty fills a void with not only an entertaining patriotic adventure story but with hope for our nation’s future.”

Tree of Liberty is a 30-year family saga led by global journeyer Curtiss Bradley who returns to an America stolen by a ruling class of D.C. tyrants. Readers receive the first 3 books of the Tree of Liberty series combined in one book. The first book immerses readers in intense first-hand accounts of the tragedies of China’s state-run past in a way that readers will never look at humanity, or their own culture, in quite the same way again. The second book accompanies them on the trajectories of China and America from 1989 Tiananmen Square through 9/11—revealing the seeds being sewn for a future reversal of fortune between the two countries. In the third book China’s government-imposed tyranny of the past serves as a cautionary tale for America’s future as we willfully repeat the same big-government mistakes.

Allen insists: “We cannot let that same kind of thing happen here. I am passionate about leaving the next generation with the country in better shape than we found it.”

Author, commentator and international businessman, Lawrence Allen lived and worked in Asia for over two decades, fulfilling the senior leadership needs of Fortune 100 global companies in the must-win markets of China and others in the Asia Pacific Region. He began his own Asia journey in Taiwan in 1989, followed by postings in Hong Kong, Shanghai, and Beijing.

Tree of Liberty is Allen’s second book and first work of fiction. In 2010 he published Chocolate Fortunes: The Battle for the Hearts, Minds and Wallets of China’s Consumers, a China business book that chronicles the quarter-century battle between the world’s chocolate companies for the hearts, minds and taste buds of China’s emerging consumers.

For more, please visit the website: http://www.treeoflibertyusa.com
Tree of Liberty is available in print and Kindle formats through Amazon.com, in print through the publisher http://www.createspace.com/4643063, and in bookstores everywhere.
ISBN/EAN13: 0615961746 / 9780615961743