International Best-selling author Alice Branton is on a mission to champion the breakthrough science of Life Force Energy, Trivedi Effect®, and its applications in pharmaceutical and nutraceuticals product research to usher in a new era of human health and wellness. 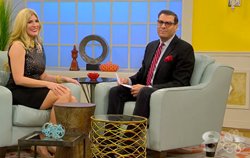 Alice Branton shared her personal story on NBC Daytime about how her thyroid auto-immune disease led her to research health issues with Daytime host Jerry Penacoli.

International Best-selling author Alice Branton is on a mission to champion the breakthrough science of Life Force Energy, Trivedi Effect®, and its applications in pharmaceutical and nutraceuticals product research to usher in a new era of human health and wellness.

Alice Branton shared her personal story on NBC Daytime about how her thyroid auto-immune disease led her to research health issues with Daytime host Jerry Penacoli.

With all the medical advancements over the last hundred years, vitamin D deficiency is still a global pandemic. Vitamin D deficiency is a major public health problem worldwide irrespective of age, location, ethnicity, and gender. Even in those residing in countries with low latitude, where it was generally assumed that UV radiation was adequate enough to prevent this deficiency, and in industrialized countries, where vitamin D fortification has been implemented now for years. Over 75% population in the USA is deficient.

Vitamin D, known as the sunshine vitamin, is produced endogenously by the human body in response to the skin being exposed to sunlight. Very few foods contain naturally occurring vitamin D, and foods that are fortified with vitamin D are often inadequate to satisfy our vitamin D requirement.

Vitamin D obtained from sun exposure, food, and supplements is biologically inert and must undergo two hydroxylations in the body for activation. The first occurs in the liver and converts vitamin D to 25-hydroxyvitamin D [25(OH)D], also known as calcidiol. The second occurs primarily in the kidney and forms the physiologically active 1,25-dihydroxy vitamin D [1,25(OH)2D], also known as calcitriol.

People are losing the ability to harness the sun energy and synthesize Vitamin D in its active form in their bodies. Fortified foods and supplementation, while sound alternatives, in theory, have little to no impact in practice due to poor bioavailability of the products and consumers.

The only and real solution is to either find a way to boost humans’ ability to synthesize adequate amounts of vitamin D from sun energy or to bring to market food and supplement products that have high bioavailability to provide required levels of vitamin D in humans.

Alice Branton, CEO of Trivedi Global, Inc., is on a mission to champion the breakthrough of highly bioavailable food and supplement products to combat the vitamin D deficiency.

Guruji Mahendra Trivedi, the founder of the Trivedi Effect®, has the unique ability to harness and transmit Life Force and infuse it into living organisms and non-living materials to greatly enhance, potentize and alter their characteristics and behaviors through the transformation at the atomic, molecular and cellular levels.

The Trivedi Effect® has been tested and validated in over 4,000 scientific experiments with world-renowned scientists and research institutes using the most sophisticated technologies available globally and has resulted in over 400 publications in major international peer-reviewed scientific journals with over 4000 citations. Research on the Trivedi Effect®has been adopted in over 4000 universities internationally including the ivy league as well as the National Institutes of Health (NIH).

In preclinical trials, the Trivedi Effect® has seen subjects increase their vitamin D3 synthesis by over 120%, much higher than the daily requirement.

Alice herself, is a true living example of the power this breakthrough of the Trivedi Effect®, as the only real factor impacting the quality of life, healthy aging and longevity. In May 2017 at forty-six years of age, a comprehensive full-body digital X-ray analysis revealed that Alice has no signs of degeneration and remarkably has a functioning growing cartilage as well as significant bone mineralization that is indicative of a healthy woman, twenty years of age.

Alice is committed to the advancement of the Trivedi Effect® via thought leadership, public speaking and continued research and product development. To keep up the latest advances and get free early access to Alice Branton’s eBook covering Vitamin D myths, reality and breakthroughs, visit http://www.AliceBranton.com