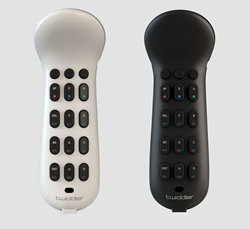 “The Twiddler is one of the lightest, fastest and easiest keyboards around," said Tony Havelka, President of Tek Gear Inc.

Tek Gear Inc. is pleased to announce the consumer launch of the all new Twiddler 3, a smaller, more mobile keyboard made to match the latest generation of tablets, watches and other mobile devices. The tiny wireless keyboard can go anywhere and connect to just about any device via Bluetooth, making it popular with a range of people from the tech savvy to people who have lost the use of one hand.

“We spent months working with researchers at leading wearable computer companies to redesign the Twiddler. Then we followed that up by asking hundreds of developers to test it out and tell us how to make it even better,” said Tony Havelka, President of Tek Gear Inc. “The Twiddler is one of the lightest, fastest and easiest keyboards around.”

Designed by San Francisco’s Kicker Studio, a world-renowned collective of designers, researchers, scientists and artists that specialize in developing natural user interfaces, the Twiddler 3 was built to be easy to hold and use. All the functions of a keyboard and mouse are within the normal range of motion of the fingers and thumb of one hand.

So how does a one-handed keyboard work?

Unlike traditional keyboards, the Twiddler has only 19 keys and uses a function called chording. You already use chords when you type – uppercase letters, for example, require you to hold the shift key together with a letter key. The Twiddler builds on that concept. Using a combination of single keystrokes and chords, you can use the Twiddler to type all the letters, characters, symbols and commands found on a standard keyboard. With practice, average users can type between 30 and 60 words per minute.

“This keyboard is for people on the go who need fast and effective data entry. Instead of fussing with socially awkward voice commands, or thumbs on tiny glass keyboards, the Twiddler lets you keep your head up and focused on the task at hand,” said Havelka. “It’s handy for Bluetooth enabled wearables, tablets, computers and phones - wherever you need to enter information, but can’t use a traditional keyboard.”

Perfect for people with mobility issues

Eddie Elliott has been using the Twiddler 3 for the past few months and said that even with just using one hand, he has experienced nearly no strain from using the device.

“I’ve looked at several custom keyboards and techniques for one-handed typing. So far, the Twiddler seems to offer the most hope for typing quickly and accurately again,” said Elliott, a software developer from San Francisco, California who lost use of his left hand after suffering a stroke. “For typing one-handed it’s been fast to learn. I can practice with the Twiddler while I’m riding public transit, unlike learning keyboard typing.”

Twiddle in any language

The Twiddler is easy customize to meet your needs, making it possible to type in any language, for example. Tek Gear already offers a variety of pre-programmed user-interfaces that can be quickly downloaded to your Twiddler.

Tek Gear (Tekgear.com) has brought emerging market technologies to market since 1993. The Canadian company has grown to offer the largest selection of wearable computing products in the world, and has partnerships with many of the world’s top wearable companies and suppliers.