A study by PsychTests.com indicates that an unwillingness to forgive others could be associated with some rather unscrupulous traits, including a propensity for manipulation and vindictiveness. 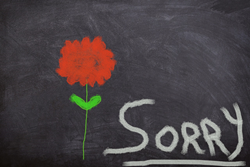 When you truly forgive someone, you are essentially giving yourself the freedom to release all the negative energy you have been holding onto.

A reluctance to forgive is understandable under certain circumstances. The hurt may be too deep or a transgression too cruel. However, when a person is completely unwilling to forgive, it can reveal a great deal about his or her character. According to research from PsychTests, sometimes the unforgiving are themselves perpetrators of deception and spite.

Collecting data from nearly 1,000 people who took their Integrity and Work Ethics Test, researchers at PsychTests focused on two distinct groups: Those who are willing to forgive others and those who are not.

DARK SIDE OF UNFORGIVENESS
The study revealed a series of red flags in the personality profile of the unforgiving group, including the following traits: (Note: Scores range on a scale from 0 to 100)

Schadenfreude (taking pleasure in the misery of others)

Disdain for weakness in others

ON THE FLIP-SIDE
People who exhibit a willingness to show mercy and to forgive also possess other commendable traits, including the following:

“In some cases, an unwillingness to forgive is just one piece of a mosaic of troubling traits,” explains Dr. Jerabek, president of PsychTests. “Our study has shown that at least some of the people in our ‘unforgiving’ group are not necessarily saints themselves, and show potential for cruelty and malice. This tendency to refuse to accept apologies could stem from a deep sense of hurt or betrayal, or even a sense of self-preservation: That one must be cruel in order to survive in an already cruel world. However, it could also be the result of a lack of empathy, and a misguided attempt to ‘even the score’.”

“You don’t have to forgive someone who has wronged you - that is your prerogative. But it’s important to understand that forgiveness is a release, a form of catharsis, and this is particularly true if you have been wronged. When you truly forgive someone, you are essentially giving yourself the freedom to release all the negative energy you have been holding onto - the sadness, the sense of betrayal, the anger, the bitterness, the desire for vengeance. Holding on to these feelings for too long will sap your sense of joy and peace of mind. It’s a waste of emotional energy, and serves no purpose but to remind you of the past. The only way to let go of the pain is to learn to forgive.”

Want to assess your integrity? Check out https://testyourself.psychtests.com/testid/3977

About PsychTests AIM Inc.
PsychTests AIM Inc. originally appeared on the internet scene in 1996. Since its inception, it has become a pre-eminent provider of psychological assessment products and services to human resource personnel,

Are you willing to forgive and forget? Here’s why this is so important:People who refuse to forgive may not necessarily be models for integrity.