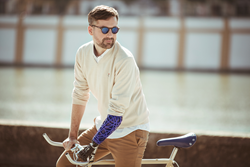 We are thrilled to extend our collection of stylish personalized prosthetics to the upper limb amputee community.

The new upper limb prosthetic covers are available in the UNYQ Performance™ Collection, which is 3D printed from a strong polyamide. The new line is available in six designs including Next, Space Suit and Pixel. The designs come in six vibrant colors.

“The launch of our prosthetic covers for arms is a special day for UNYQ,” says Eythor Bender, CEO and cofounder of UNYQ. “We are thrilled to extend our collection of stylish personalized prosthetics to the upper limb amputee community.”

As with UNYQ’s entire line of prosthetic covers, the company strives for designs that are easy to wear, reimbursable by insurance, don’t interfere with the functionality and comfortability of the prosthesis and give amputee’s control over their appearance.

“For me, the look of the prosthesis is as important as its functionality,” says Bertolt Meyer, college professor, upper limb amputee and UNYQ user. “A stylish prosthetic cover gives me the option to turn my prosthesis into a fashion accessory. It’s not only a sign of my self confidence, but it has also given me more confidence.”

UNYQ prosthetic covers for arms are available for above and below elbow amputees.

Close Up of UNYQ's Arm Covers for AmputeesNext is one of six new prosthetic cover designs for upper limb amputees.