Inspired by his past, Grammy winner touched by child's suicide works with nonprofit to end ostomy surgery stigmas. 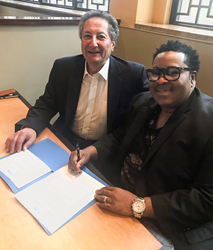 “Most people with an ostomy who connect to the support and education they need live full, active, and healthy lives” -UOAA President Susan Burns

Grammy award-winning songwriter, vocalist and producer Damon Little was working on a new inspirational single “Be Alright” when he felt that something was missing. While touring at a radio station in Louisville, Kentucky he heard of the tragic suicide of Seven Bridges. The 10-year-old boy had been teased due to his medical condition that caused him to once wear a colostomy pouch (bag) for the elimination of bodily waste. A flood of emotions and memories overcame Mr. Little who was compelled to record a testimony to add to the song revealing for the first time that he too had lived with a colostomy until the age of 13, not much older than Seven when he died.

“This boy’s story was my story. The feelings of isolation and pain of endless surgeries,” says Damon Little. He wanted to do more to help people living with an ostomy so he reached out to the nonprofit organization United Ostomy Associations of America (UOAA) to see what could be done to help the next person in need. UOAA has over 300 affiliated support groups around the country, a national advocacy program, and distributes free educational information to ostomy patients, caregivers and medical professionals.

Mr. Little found that the volunteers of UOAA and many in the ostomy community (estimated by UOAA at 725,000 to one million people in U.S.) were equally shaken by this tragic loss and the existing stigmas that likely contributed to it. Ostomy surgery is a life-saving procedure that allows bodily waste to pass through a surgically created stoma on the abdomen into a prosthetic known as a ‘pouch’ or ‘ostomy bag’ on the outside of the body or an internal surgically created pouch for continent diversion surgeries. An ostomy may be necessary due to birth defects, cancer, inflammatory bowel disease, diverticulitis, incontinence and many other medical conditions. They are also necessary in cases of severe abdominal or pelvic trauma resulting from accidents or from injuries sustained during military service.

Ostomy or continent diversion surgery can occur at any age and many patients feel in robust health after recovery but it is often the emotional scars that take the longest to heal. “Most people with an ostomy who connect to the support and education they need live full, active, and healthy lives,” says UOAA President Susan Burns, a longtime ostomate. “Many people don’t realize that with some help they can swim, play sports, work, be intimate, and fully embrace a second lease on life.”

Damon Little is now partnering with UOAA to reach out to communities everywhere, particularly underserved populations, to dispel ostomy stigmas and connect people in need with support and educational resources. He’ll also serve as UOAA’s Ostomy Awareness Day Champion on October 5, 2019. Events include the Run for Resilience Ostomy 5k that will raise awareness in nine U.S. cities.

For more information on ostomy education, advocacy and a support visit: http://www.ostomy.org

Grammy Award Winning artist and former child ostomy patient Damon Little has the his audiences on their feet.