The USC Fisher Museum of Art and USC Shoah Foundation proudly present “Facing Survival | David Kassan,” an exhibition featuring paintings and drawings of more than two dozen Holocaust survivors, opening Sept. 18, 2019, at the Fisher Museum of Art supported by the Norris Family Foundation. The collaboration advances USC Shoah Foundation’s Stronger Than Hate initiative to build a proactive, effective, actionable response to the growth and proliferation of antisemitism, racism and other forms of identity-based hatred worldwide. 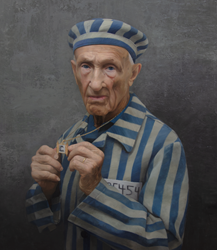 By spending so much time with his subjects, David develops an understanding of their lives that he can then transform onto the canvas, More than a photograph, these paintings allow us to look deep into the soul of Holocaust survivors to see the richness of their lives. Stephen Smith

In preparation for painting their portraits, artist David Kassan recorded his subjects’ testimonies, getting to know them deeply. His intimate understanding of his subjects and of their unique histories enables him to convey a sense of their experiences during the Holocaust as much as it does their individual appearances now: The visceral, lifelike imagery captures each person’s spirit, pain and dignity. Kassan’s paintings become a form of testimony in their own right, revealing the luminous visage of resilience, the complex nature of survival and a contemporaneous reflection of their lives in the aftermath of genocidal violence.

To extend the exploration of testimony and its multiple forms, the exhibition will also feature USC Shoah Foundation’s interactive biography “Dimensions in Testimony.” Through this cutting-edge interactive display, visitors to the exhibition will be able to ask questions of some of the subjects in the paintings and hear their pre-recorded responses, giving firsthand accounts of their experiences. The exhibition will further illuminate Kassan’s process by featuring the sketches he made as he progressed to the final paintings. An in-depth catalogue will also accompany the exhibition.

“‘Facing Survival | David Kassan’ joins distinct but related forms of testimony together,” said Selma Holo, Director of USC Fisher Museum. “Through the art of David Kassan, we are bringing to the forefront a body of testimony that extends beyond the verbal, the written, to communicate in a purely visual language. This testimony, crafted from Kassan’s remarkable representational art, will leave an indelible mark on all who view it. Facing Survival is, above all, an attempt to defy generalization about the horror of the Holocaust, to venture beyond the incomprehensible and ungraspable number of murdered—six million—and to powerfully feel, through individual portraiture, the reality of each single soul and the miracle of his or her continued existence.”

Bradley K. Norris, a trustee of the Kenneth T. And Eileen L. Norris Foundation, said he was honored to help bring the project to fruition.“This is an important work that showcases not only David’s artistic commitment to his subjects, but the survivors’ commitment to ensuring their stories are never forgotten,” he said.

Born in 1977 in Little Rock Arkansas, David Jon Kassan is an internationally recognized contemporary American painter, best known for his life-size representational paintings, which combine figurative subjects with symbolic textured abstract backgrounds. A form of social documentary, David’s paintings are often described as raw, poignant and profoundly honest, capturing humanity in its true form. As an artist, Kassan acts as an empathetic intermediary between the subject he portrays and the viewer. More than simply replicating his subjects Kassan seeks to understand them. He seeks to capture the essence of those he paints, imbuing them with their own voice.

David is a lauded realist painter who brings “Facing Survival” to USC Fisher Museum of Art following his residency with the museum and USC Shoah Foundation in 2018. Kassan’s works can be seen in many public and private collections worldwide. He is represented by Gallery Henoch (Chelsea), New York, NY and The Maxwell Alexander Gallery, Los Angeles. Kassan lives and works in Albuquerque, New Mexico and Brooklyn, NYC. His art has been exhibited at the Smithsonian National Portrait Gallery, The National Portrait Gallery in London, The Scottish National Portrait Gallery, among others.

About USC Fisher Museum of Art
USC Fisher Museum of Art is the oldest art museum in the city of Los Angeles founded as a free public art museum and still functioning as such in its original location. It was incorporated into the University on November 14, 1939. With a collection of over 2500 pieces of art, USC Fisher Museum’s exhibitions range from the Old Masters to the contemporary. USC Fisher Museum has a special interest in collecting and displaying the Art of the Americas, particularly Latin America. The museum is also committed to exhibitions and programming dedicated to exploring significant aspects of social justice through the visual arts.

About USC Shoah Foundation
USC Shoah Foundation – The Institute for Visual History and Education develops empathy, understanding and respect through testimony, using its Visual History Archive of more than 55,000 video testimonies, award-winning IWitness education program, and the Center for Advanced Genocide Research. USC Shoah Foundation’s interactive programming, research and materials are accessed in museums and universities, cited by government leaders and NGOs, and taught in classrooms around the world. Now in its third decade, USC Shoah Foundation reaches millions of people on six continents from its home at the Dornsife College of Letters, Arts and Sciences at the University of Southern California.