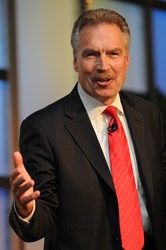 Bill Clement, a former NHL All-Star and champion, will deliver the keynote speech at the 2014 US Lacrosse National Convention Jan. 10-12 in Philadelphia.

There are a number of similarities between hockey and lacrosse -- foremost a need for quality people to serve as leaders for younger athletes.

US Lacrosse has announced two-time Stanley Cup champion and current actor, author and broadcaster Bill Clement as the keynote speaker at the 2014 US Lacrosse National Convention, presented by Champion, set for Jan. 10-12 in Philadelphia.

Clement, who won two NHL championships as a center with the Philadelphia Flyers, will kick off the lacrosse world’s largest professional development event with “EveryDay Leadership: The Power to Influence Outcomes” at 7 p.m. Jan. 10 in the Pennsylvania Convention Center.

“Coaches and officials command positions of leadership for young people, and it’s great to see US Lacrosse playing such a vital role by investing in programs and events that develop those who lead our youth,” Clement said. “I want to thank US Lacrosse for the honor of addressing lacrosse coaches and officials at its annual convention. There are a number of similarities between hockey and lacrosse — foremost a need for quality people to serve as leaders for younger athletes.”

“We are honored and grateful to have Bill Clement as the keynote speaker at our convention,” said Beth Porreca, director of special events at US Lacrosse. “Bill is a Philadelphia sports legend, but more than that, it’s his personal tale of overcoming adversity that will provide valuable lessons for our coaches, officials and administrators to take to their local lacrosse programs.”

Clement played center during an 11-season NHL career that saw him help the Flyers win the Stanley Cup in 1974 and 1975. Twice he was named a league all-star during later tenures with the Washington Capitals and the Flames (the franchise played in Atlanta before moving to Calgary). Following retirement, Clement went into the broadcast booth and also became a critically acclaimed author, speaker and actor.

For 15 years, Clement served as the face and voice of nationally televised hockey and the lead game analyst for ESPN’s extensive schedule of “National Hockey Night” telecasts. Today he can be seen regularly on Comcast SportsNet Philadelphia, calling Flyers games.

Clement also has been part of five Olympic broadcast crews, covering hockey, badminton or table tennis in various Olympic Games since 1992. Most recently, Clement served as studio host for the “NHL on NBC” and for “Hockey Central” on the NBC Sports Network, and his voice continues to be heard on EA Sports’ NHL video games. His acting credits include work on the ABC daytime drama “All My Children” and more than 250 television ads.

Lacrosse coaches, officials and administrators can purchase convention tickets online at uslacrosse.org/convention for the early-bird rate of $95 before Nov. 30 (a savings of 40 percent vs. walk-up pricing). The convention ticket includes free post-event access to audio/video recordings and PowerPoints of all convention presentations. Marriott, the official hotel partner of US Lacrosse, is providing discounted rooms for convention attendees at the Philadelphia Downtown Marriott, adjacent to the convention center. Discounted rates expire Dec. 15 (market pricing thereafter).

The US Lacrosse National Convention has drawn approximately 7,000 participants in each of the last two years, and it includes four live demonstration areas, 150 educational sessions, business meetings for leadership groups within the sport and the Major League Lacrosse Collegiate Draft.

The convention also includes the US Lacrosse Fan Fest, presented by TeamZila and STX, which opens the convention center to the public Jan. 11 from 11 a.m. to 5 p.m. Lacrosse fans can check out gear and apparel from some 160 exhibitors in the sport’s largest expo hall, watch live demonstrations, and get autographs from members of Team USA and other top players.

For information on schedules, speakers, hotel discounts for attendees, Fan Fest, and to purchase a convention ticket, visit uslacrosse.org/convention. Follow the convention on Twitter @USLaxConvention (#LaxCon). Membership in US Lacrosse is required to attend the full convention.

About US Lacrosse
US Lacrosse, a 501(c)(3) nonprofit corporation, is the national governing body of men’s and women’s lacrosse and the home of the nation’s fastest-growing sport. US Lacrosse has more than 410,000 members in 64 regional chapters across the country. Through responsive and effective leadership, US Lacrosse provides programs and services to inspire participation while protecting the integrity of the sport. Bookmark, like and follow US Lacrosse at uslacrosse.org, fb.com/uslacrosse and @uslacrosse, respectively.

Note to Media: To request a credential to the convention, email pkrome(at)uslacrosse(dot)org before Dec. 20, 2013, with “Convention Credential Request” in the subject field.