Value Store It has opened a new self storage facility at 320 Washington St in Mount Vernon, NY, restoring the hundred-year-old Mauser Manufacturing warehouse to its former glory. 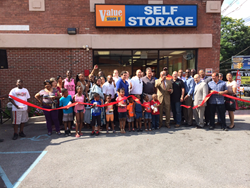 Employees and citizens gather with Mayor Ernest Davis for the ribbon cutting.

'Once we found out about the history of the location, we decided that along with the conversion, the building should be restored to its original composition.' - Carlos Diaz, Vice President and General Manager, Value Store It

Seldom do citizens and city officials alike gather to celebrate the grand opening of a self storage facility. However, on July 17th Value Store It, Inc. did more than simply open up for business. They opened the door to memories and feelings that would flood the minds of nearly everyone in town. If you were to visit 320 Washington Street Mount Vernon, NY just a few years ago, your eyes would be met by the remnants of a 108-year-old building with four foot high grass and vines creeping up walls that were ready to crumble to the ground. The five story building was originally constructed to be a silver factory and warehouse by the Mauser Manufacturing Company.

Mauser merged with Hayes & McFarland Company and Roger Williams Silverware Company to form the Mt. Vernon Company Silversmiths in 1903. During the 60s, the building was purchased by APF Master Frame Makers, Inc, a manufacturer of fine mirrors and frames for museums, public and private collections, galleries, and designers. APF is the largest company of its kind in America, employing several generations of Mount Vernon families in that same building. The mother of the Deputy Building Commissioner worked at the factory for over twenty years. Until the turn of the century, it had served the community not only as a source of income, but as a source of pride and a sense of togetherness. Once APF left Mount Vernon for a larger, more centralized location, the building sat vacant for about ten years.

After that period of time, Value Store It purchased the note from the bank. “Once we found out about the history of the location, we decided that along with the conversion, the building should be restored to its original composition.” said Carlos Diaz, Vice President and General Manager for Value Store It. With that began the long process of renovation. Two years and nearly two million dollars later, Value Store It has completed the journey and the results are inspiring. All of the original Chicago-style brick has been re-pointed, pressure cleaned, and acid washed so that it looks brand new. Similar work was done to the marble finishes on the outside window sills and main entranceway. The eight different sections of roof that this unique building sports have all been completely replaced. The jungle around the building has also been cleared to reveal lush green landscaping, and solid white sidewalks.

The interior of the building was covered with lead-based paint which the construction team had to sandblast down to the original natural wood finish. They installed new... well… everything. The building is equipped with a new retail office, restrooms, elevators, heating and A/C, lighting, and plumbing. Mr. Diaz mentions, “This state of the art facility boasts over 67,000 sq ft of rentable space. Units vary in size from 25 sq ft up to 400 sq ft. Lockers, climate controlled and drive up units are available.”

Bryan Lekas, Vice President of Operations for Value Store It, mentioned there were several secret passageways and rooms discovered during the renovation. "These came as a surprise to us, and even people who had been inside the building before." These spots were cleaned up and brought up to standard.

Opening this building was very much appreciated by the citizens according to Hina Sherwani, First Assistant Corporation Counsel for Mount Vernon City Hall. “Preserving the architecture and relics from the factory allowed many of our citizens to reflect on their own family’s history […] it is a wonderful feeling to experience, learn and feel connected to the people, ideas and events of our great past to see what they saw and touch what they touched."

Yes, Value Store It certainly brought this old building "Back to the Future." In fact, they installed a digital drive into a tower clock on the building that is nearly identical to the one that can be seen in the classic movie. The clock is now fully functional and does not need to be manually operated. For the time being, the building will be used solely as a self storage facility, and not as a movie set. An exceptional occupancy rate is expected to be evident within the next year.

For further information about Value Store It, please call them at (914)663-1990 or visit http://www.valuestoreit.com.

Workers pressure clean and acid wash the brick and marble finishes during the building resotration.Grand Opening Value Store It Self Storage Mount Vernon

Damaged brick on Hartford Avenue side of the facility prior to restoration.Grand Opening Value Store It Self Storage Mount Vernon