Cigar Advisor Magazine is a digital publication dedicated to providing cigar enthusiasts with entertaining and informative content. Their January 2014 issue features a piece on the history of the iconic Vegas Robaina cigars, one of the most renowned Cuban cigar brands ever made. 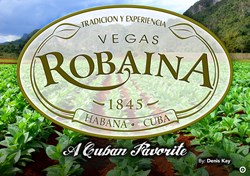 Robaina became a cultural icon, receiving visits to his farm and touring the world representing his cigar brand and the Cuban cigar industry at large. He died in 2010, at age 91, though his legacy will live on indefinitely.

The all-new Cigar Advisor Magazine is an online cigar magazine that brings a fresh, irreverent, and down-to-earth perspective on all things cigars to thousands of smokers. In addition to educational cigar content and behind-the-scenes cigar industry articles from some of the business’s top names, Cigar Advisor delivers an array of content about a variety of topics of interest to people who enjoy the cigar lifestyle. The magazine also features cigar reviews and ratings submitted by real smokers, and much more. Cigar Advisor Magazine has just published a new article entitled, "Vegas Robaina: A Cuban Favorite," written by cigar blogger and Cigar Advisor contributor Denis K. The article was written as a history of the brand, and includes tasting notes, as well as a brief history of the brand's namesake, Alejandro Robaina.

"Vegas Robaina is one of my favorite cigar brands, so I was excited for the opportunity to share the story of the brand," Mr. K was quoted as saying of the piece, which appears in the January, 2014 issue of Cigar Advisor magazine.

Robaina was in charge of his family's tobacco farm by 1950, just nine years before the Cuban Revolution. In the subsequent upheaval, Fidel Castro ordered that the production of cigars and cigar tobacco be consolidated under the Cuban government, along with many other industries. Robaina bravely stood up to Castro, and with the intervention of Che Guevera, was able to "retain control over his farm, rising to even greater fame as one of the best known tobacco growers in Cuba."

Robaina subsequently became a cultural icon, receiving visits to his farm and touring the world representing his cigar brand and the Cuban cigar industry at large. He died in 2010, at age 91, though his legacy will live on indefinitely.