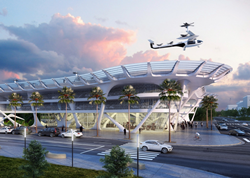 The VFS website www.eVTOL.news — the world’s first and foremost website on electric VTOL — has more than 200 designs in the World eVTOL Aircraft Directory, as well as more than 200 feature articles and news items.

The Vertical Flight Society (VFS) recently added the 200th electric vertical takeoff and landing (eVTOL) aircraft concept to its online World eVTOL Aircraft Directory. The Directory, launched in 2017, is the world’s most comprehensive compendium of electric and hybrid/electric-powered VTOL aircraft in development by aerospace companies, entrepreneurs and inventors around the globe.

“We recognized in 2013 that there was a rapid convergence of technologies — including advances in electric motors, batteries, power management systems, fly-by-wire flight controls and lightweight composite structures — that would enable what we call the Electric VTOL Revolution,” said Mike Hirschberg, VFS Executive Director. VFS held the world’s first technical meeting on eVTOL in 2014 and the Society’s 7th Annual Electric VTOL Symposium will be held in Silicon Valley in January. “Electric VTOL is one of the most exciting developments in aviation since the birth of the helicopter more than 75 years ago. It holds the promise of being even more transformative than the advent of turbine engines.”

Thousands of people are now engaged in eVTOL aircraft development — including more than 60 percent of the VFS’s corporate members — and the Electric VTOL Revolution is being propelled by many of the world’s leading aerospace, technology, automotive, transportation and distribution companies, as well government agencies, militaries and academia. Missions enabled by electric VTOL technologies will likely include urban air mobility (UAM), regional air mobility (RAM), cargo delivery, personal air vehicles (PAVs), emergency medical service (EMS) and many others as yet unknown.

The Society began compiling the World eVTOL Aircraft Directory in late 2016 when only a half-dozen electric-powered VTOL aircraft were known to exist and the term “eVTOL” was only used by a small segment of the aerospace community. The VFS Directory on http://www.eVTOL.news — the world’s first and foremost website on electric VTOL — also features more than 200 feature articles and news items, and is updated daily by VFS staff. The free online Directory logged its 50th eVTOL aircraft in January 2018, its 100th in July 2018 and its 150th in January 2019.

“The Vertical Flight Society’s role is to help these companies, engineers, inventors and government agencies to overcome the many barriers to commercial success, which include technology, regulations, infrastructure, air traffic management and system safety,” said Jim Sherman, VFS Director of Strategic Development. “We support the eVTOL community through the many benefits of VFS membership, but also by holding conferences and workshops to increase understanding and collaboration in this rapidly advancing field.”

VFS is hosting its first in a new series of eVTOL workshops on the “defining challenges” for UAM aircraft, next week on Sept. 10-12 at the US Navy Memorial Visitors Center in Washington, D.C. This three-day meeting is dedicated to identifying the foundational elements needed to support this growing industry — particularly infrastructure, air traffic management, noise and system safety.

Importantly, this workshop will review the activities of key organizations, and look for gaps and overlaps in development to ensure a successful realization of UAM and other eVTOL missions. VFS has invited presentations by leaders from the Aerospace Industries Association (AIA), ASTM International, the General Aviation Manufacturers Association (GAMA), the National Business Aviation Association (NBAA), SAE International and the newly-founded Community Air Mobility Initiative (CAMI).

About VFS: The Vertical Flight Society was founded as the American Helicopter Society in 1943 by the visionaries of the early helicopter industry, who believed that technological cooperation and collaboration were essential to support this new type of aircraft. Today, VFS plays a similar role helping to advance today’s revolutionary VTOL aircraft. It is the world’s oldest and largest vertical flight technology organization.