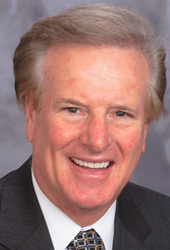 If we can cut down the time necessary to bring new employees up to speed, we can significantly improve productivity and profitability.”

Noting that onboarding mistakes occur in over 50% of new hires, Ruef cited costs to the organization approaching 10 times the individual’s yearly compensation. Drawing a sharp distinction between the traditional orientation program, which he called “Onboarding by Default,” and a successful process which he called “Onboarding Transformed,” Ruef focused on the importance of welcoming during the orientation process, and then facilitating the assimilation of new hires into a new culture and then accelerating their time to productivity. He opened by relating a compelling story of a fictional new hire he called Janet and her bad onboarding experience. He exhorted attendees to “step into her shoes” and experience her first day just as she did. The group was spellbound as they listened and identified with an initially enthusiastic employee who left the first day wondering if her old company would take her back. Working in small discussion groups the audience discussed their own “onboarding nightmares,” and then shared ideas of how to improve, including recognizing their own culture so they could help new hires assimilate. Ruef presented findings of his own study addressing the relationship between onboarding and engagement, and noted that new employees who received effective onboarding were less stressed and significantly more productive both in the short and long term.

Ruef then seamlessly tied in the 10 Secrets of Success to bring the presentation to a strong close. The Secrets addressed key issues of “onboarding transformed” including the critical importance of making the new hire feel important and welcome the first day, challenges to candidate and manager participation, development of personal success plans, the proper use of technology to connect new employees, as well as individual follow up interviews. Ruef also stressed the importance of appointing what he called a go-to-person or buddy to address routine operational questions. Ruef explained that this significantly eases initial uncertainty and confusion, and removes apprehension about asking questions of his manager that the new hire feels he is expected to know. Ruef promised participants that implementing the “10 Onboarding Steps would transform their programs, increase revenue and profit all while enhancing their personal brand as a strategic partner.