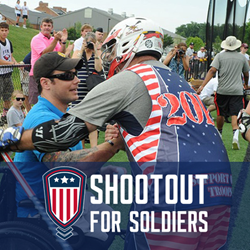 The Shootout event was a rousing success, and we’re honored to have worked with an organization that takes the support of New York area veterans so seriously,

The Zabbia Insurance Agency, an insurance services and financial consultation firm with offices headquartered in Nassau County, is announcing the success of a charity event hosted in conjunction with the Shootout For Soldiers organization to raise community support for area veteran programs

The Shootout for Soldiers organization hosts a day-long lacrosse event that brings in participants from all over the region. Funds raised during this event are used to give a voice to local veterans and help engage the community on issues that matter to military families, and helps build bridges of understanding and empathy between military and civilian communities.

“The Shootout event was a rousing success, and we’re honored to have worked with an organization that takes the support of New York area veterans so seriously,” said Robert Zabbia, founder and executive director of the Zabbia Insurance Agency.

In an effort to amplify the reach of the Shootout For Soldiers event, Zabbia and his team built an online information sharing nexus over social media and email to help keep regional supporters informed. A full length article posted in the firm’s online magazine “Our Hometown” was also instrumental in helping to draw in community support: http://www.zabbiaagency.com/Our-Hometown-Magazine_39.

The original funding goal of the Shootout For Soldiers was $50,000, but the organization raised more than $100,000 to benefit local veterans. As members of the “Agents of Change” charity support network, the Zabbia Insurance Agency plans to work in support of more regional charities over the months to come.

Support for the Shootout For Soldiers organization is still coming in, and the Zabbia Insurance Agency has made the following page available for those seeking information or who would still like to donate to the event: http://www.zabbiaagency.com/Playing-Lacrosse-For-A-Greater-Cause_19_community_cause. As the Zabbia Insurance Agency launches more charity events in the future, details will be provided on the firm’s frequently updated Community Causes roster: http://www.zabbiaagency.com/community-cause.

As a Personal Finance Representative in Nassau County for nearly 20 years, agency owner Robert Zabbia knows many local families. His knowledge and understanding of the people in his community ensures that clients of Zabbia Insurance Agency are provided with an outstanding level of service. Robert and his team look forward to helping families protect the things that are most important - family, home, car and more. Zabbia Insurance also offers clients a preparation strategy for achieving their financial goals. To contact an expert at Zabbia Insurance Agency, visit http://www.zabbiaagency.com/ or call (516) 799-6900.