This indie rock song is a powerful message on this Veteran's Day to remember and commemorate every war veteran around the world. Veterans do it for us whether we realize or understand our government's intention or not, and while politics, nationalities and religion can often vary the story of a veteran always stays the same. 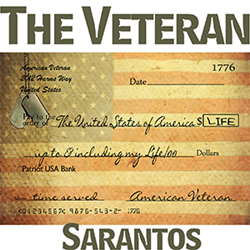 I think people forget that even if they don't necessarily agree with a particular war and its point or purpose, the real people that go to war give it their all. They risk everything. They come back bruised and shattered both physically & emotionally!

In November 1919, President Wilson proclaimed November 11 as the 1st commemoration of Armistice Day with the following words: "To us in America, the reflections of Armistice Day will be filled with solemn pride in the heroism of those who died in the country’s service and with gratitude for the victory, both because of the thing from which it has freed us and because of the opportunity it has given America to show her sympathy with peace and justice in the councils of the nations…"

Sarantos has never been a member of the armed forces. However, based on the work he has done over the years with veterans of war, a fondness and genuine gratitude has become engraved into his spirit. Experiencing firsthand the post-traumatic stress disorder they go thru while struggling to move back to a normal life taught him the undeniable toll war takes on a fragile human soul. So a decision was made to write a song in their honor. What do they go through? What do they feel? Is there a sense of appreciation, or a lack of respect or empathy they suffer...do they feel forgotten?

This song is a powerful message on Veteran's Day to remember and commemorate every war veteran around the world. Veterans do it for all of us, whether we realize or understand our government's intention or not. Politics, nationalities and religion can often vary but the story of a veteran will always be the same. The music video comes out next week.

"This is a really emotional indie soft rock song dedicated to all the men and women who have served their country in the armed forces" says Sarantos. "It is written and sung from the point of view of a veteran who gave the best he had and could. He does not regret the price he paid. He did it all for you! I think people sometimes forget that even if they don't necessarily agree with a particular war and its point or purpose, the actual people that go to war give it their all. This is not make believe or a movie. They don't pretend. They risk their everything. They risk their lives for their country. They come back bruised and shattered both physically and emotionally. We should give them their due not only on Veteran's Day but also on every single day they are with us as veterans of war. I salute them. I thank them! This song is for them."

33% of any music-related sales profits from this song are going straight to Wounded Warrior Homes.

Wounded Warrior Homes provides transitional housing to 9/11 combat veterans with Traumatic Brain Injury (TBI) and Post-Traumatic Stress (PTS). They are citizens, like you, who deeply care about our nation and appreciate the sacrifices of those who have served in armed conflict to protect our country, our nation’s interests, our people and those in other nations.