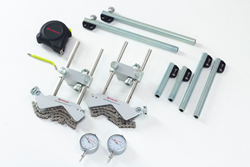 As a company that’s out to Realign America, we want to offer the very best tools to get the job done.

Fixturlaser has developed a new dial indicator kit specifically designed to perform reverse dial alignments using the Verti-Zontal Compound Moves™ method. The Verti-Zontal method was developed by VibrAlign to make shaft alignments quicker and easier. It achieves this by reducing both the amount of bolt loosening and tightening as well as the number of moves required to achieve alignment.

The new Fixturlaser Dial Indicator Kit is supported by the Fixturlaser Dials App. The Dials app walks the user through the Verti-Zontal alignment with a detailed 3D graphical interface. Even better, the Dials app performs all the complicated alignment math. The app, available free from both the Apple App Store and Google Play, is ideal for use on a tablet.

According to David Zdrojewski, CEO of VibrAlign, “As a company that’s out to realign America, we want to offer the very best tools to get the job done. The combination of a dial indicator kit plus the alignment app, supported by free training videos, is an expression of our commitment to the men and women who are doing the alignments that keep the machinery and the country running.”

About VibrAlign
VibrAlign was started in 1983 as a vibration and alignment service organization and later became a distributor of equipment which, appropriately, equipped the company to better serve its customers. VibrAlign is America’s exclusive distributor of Fixturlaser® – the manufacturer of the new Fixturlaser EVO laser alignment tool. For more than thirty years, VibrAlign has been growing across the country. Today the company, operating out of local offices in every major region of the U.S., is out to realign America.