Days of Our Lives Recurring Guest Star Announced as a 2021 National Academy of Television Arts and Sciences Awards Nominee for Outstanding Guest Performer. 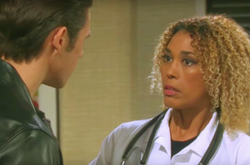 I was surprised by the nod for the role. It's very exciting and humbling to be acknowledged by the Academy.

Victoria Platt, the exceptionally talented television, film and stage artist receives an Outstanding Guest Performer Daytime Emmy nomination for her role as “Dr. Amanda Raynor” on the daytime drama series Days of Our Lives. The nominees were officially announced by the National Academy of Television Arts and Sciences (NATAS) on March 25, 2021. The television broadcast of the 48th Annual Daytime Emmy Awards will be presented on Friday, June 25, 2021 (8PM – 10PM ET/PT) on the CBS television network and streamed on Paramount +.

For many familiar with the Queens, NY native’s impressive body of work, this nomination is well-deserved. Platt is a quadruple threat actor, singer, dancer and producer. She is currently recurring on the Freeform dramatic series, Good Trouble and recurred for the last two seasons of NCIS. Platt also appeared on NCIS: New Orleans and NCIS: LA in unrelated roles. She has appeared in the feature film #Truth, the festival short The Gleaner, and the sci-fi thriller Eruption: LA. Platt’s additional film work includes A Hard Problem, Cover, Jonah Hex and as the iconic Josephine Baker in HBO’s Winchell. She also co-produced an adaptation of Shakespeare’s Henry IV entitled H4. Platt has had major recurring roles on CW’s Star Crossed, ABC’s The Gates and Shawn Ryan’s The Chicago Code. In addition to her nominated role on Days of Our Lives, Platt has also appeared on the daytime television series The Guiding Light and All My Children. Her additional television credits include 9-1-1, Hawaii 5-0, Lucifer, Bones, The Mentalist, Castle, Crossing Jordan, Criminal Minds, Switched at Birth and Strong Medicine.

Platt also provided the voice of “Sycorax” in the science fantasy motion comic book, Califia and the Timeless Sentries.

Platt’s Daytime Emmy nominated character, Dr. Amanda Raynor on Days of Our Lives, is the head of the OBGYN department at the local hospital. Dr. Raynor is the top specialist in her field and has a warm demeanor, while still remaining the utmost professional. She is incredibly bright and approachable.

Platt has this to say about portraying, Dr. Amanda Raynor, “Amanda is a complex and contradictory character and that’s what I loved about playing her. She was doing some very horrible things but not for malicious reasons.” Platt continues, "I was surprised by the nod for the role. It's very exciting and humbling to be acknowledged by the Academy. After doing a few stints in Daytime on All My Children and Guiding Light, this is the first time I've been HERE and it’s pretty awesome!"

In addition to her first time Daytime Emmy nomination, Platt has also been nominated for an Ovation Award for her portrayal of the character “Emilia” in the Kirk Douglas Theatre’s run of the hip-hopera Venice in 2011 and reprised her role in The Public’s production of Venice the following summer.

The Daytime Emmy Award is an American accolade bestowed by the New York-based National Academy of Television Arts and Sciences in recognition of excellence in American daytime programing. Friends, family and fans alike are rooting for Victoria Platt’s win in the Outstanding Guest Performer category at the 48th Annual Daytime Emmy Awards ceremony on June 25th.