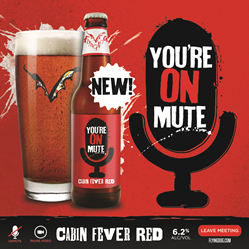 “Technology brings with it challenges as well as comedy, and the fact that without fail, you have at some point, been on mute.” - James Maravetz, VP of Marketing, Flying Dog Brewery

We've all had that moment, where you launch full tilt into a masterclass of conversational genius, only to be told, “you're on mute.” Flying Dog is paying tribute to those moments from this year where you just couldn’t get a handle on your audio button with the brewery’s new Cabin Fever Red Ale called You’re on Mute.

Crafted to take the edge off a day full of virtual meetings that could have been emails, this medium-bodied Red Ale balances toasted malts, and just a hint of chocolate, with a perfectly engineered blend of hops and aromas. You’re on Mute Cabin Fever Red Ale is brewed with Galaxy hops and carries a 6.2% ABV with 25 IBUs.

“A unifying experience for people this year has been the transition to working from home and all of the ups and downs that come with that shift,” said James Maravetz, VP of Marketing for Flying Dog Brewery. “Technology brings with it challenges as well as comedy, and the fact that without fail, you have at some point, been on mute.”

You’re on Mute Cabin fever Red Ale will be available locally on draft in select Frederick, MD bars and restaurants starting in April. The beer will also be available in stores later in April in 6-packs of 12oz bottles. Consumers are encouraged to check Flying Dog’s social media pages for updates and visit Flying Dog’s Beer Finder to locate inventory in their area: flyingdog.com/beer-finder.

About Flying Dog Brewery:
As one of the fastest-growing regional craft breweries in the United States, Flying Dog has been brewing world-class beer that pushes the confines of traditional styles for 30 years. Flying Dog attracts everyone from craft beer connoisseurs to those just catching the wave with up to 20 styles available at any given time. Introduced to Flying Dog by the Gonzo writer Hunter S. Thompson, artist Ralph Steadman has produced original art for Flying Dog's labels since 1995. Recent accolades for Flying Dog include its Pale Ale ranked as the #1 American Pale Ale in the U.S. by The New York Times. For more information, visit http://www.flyingdog.com. Flying Dog is now available on Drizly.