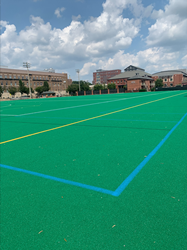 AstroTurf has long been a visionary and innovator in producing a surface that provides elite playability and tremendous durability. The A12 product installed at Cary Street Field is a direct result of that vision and innovation

After a historic spring season, the Virginia Commonwealth University (VCU) Division 1 field hockey team, led by Atlantic 10 Coach of the Year, Stacey Bean, will be starting the fall season on brand-new, state-of-the-art turf. VCU is installing a top-of-the-line AstroTurf® system at Cary Street Field, demonstrating the school’s enduring support for its athletes by providing them with a winning athletic surface engineered for elite play.

Fast-playing and remarkably consistent, the new AstroTurf® installation uses a unique knitted nylon turf to ensure unmatched ball speed and durability. The AstroTurf® 12 system is the original AstroTurf® made for the sport, and it’s the preferred choice for field hockey at top schools nationwide, including Boston University, Stanford, Yale, Duke, and Princeton.

Ever since the game transitioned from natural grass to synthetic turf, every single NCAA Division 1 Final Four tournament has been played on an AstroTurf® Surface.

For the layer beneath the turf, VCU chose a 26 mm E-Layer, a premium shock pad made with a special polyurethane binder. This E-Layer offers outstanding shock absorbency and is totally solid underfoot. Combined with the knitted turf above, it acts as an ultra-safe, ultra-consistent playing field. Both the turf and the shock pad are highly porous, giving the Rams a safer surface in wet conditions.

“First and foremost, I’d like to thank the administration at VCU and the staff at AstroTurf for their work on this install,” Bean said. “We are excited to start the season on this new AstroTurf 12 pitch. It’s a fantastic product that will provide our players with a world class surface to train and compete on.”

AstroTurf has shown its unwavering commitment to the game over the years, supporting players at all levels through its involvement in USA Field Hockey, the National Field Hockey Coaches Association, and FIH. This new installation at Virginia Commonwealth University is one more proud step forward for the company.

“AstroTurf has long been a visionary and innovator in producing a surface that provides elite playability and tremendous durability,” added Bean. “The A12 product installed at Cary Street Field is a direct result of that vision and innovation.”

The Rams will play the first game of the fall season at home on August 27th against American University. Other home games for 2021 include matchups with William & Mary, ODU, Bellarmine, Saint Joseph’s, Georgetown, and Wake Forest.

About AstroTurf®
For athletes and sports enthusiasts, AstroTurf® has redefined the way the game is played. The brand offers advanced, multi-sport, and specialized synthetic turf systems with proprietary engineered technologies. A growing number of high schools, colleges, professional sports teams, and municipalities continue to select AstroTurf-branded products for their premium quality, technical superiority, and safety. To learn more, visit AstroTurf’s website at http://www.astroturf.com.