Officials warn that the period between Thanksgiving and New Year’s Day is “especially dangerous” because of drunk drivers. This year, a powerful virtual training simulation by SIMmersion, developed in partnership with the University of Wisconsin-Madison and funded by the National Institute on Alcohol Abuse and Alcoholism (NIAAA), will help doctors reach out to patients before their risky drinking makes the holidays tragic. 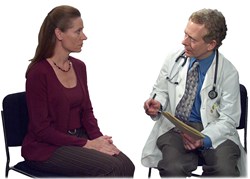 Research shows that when doctors intervene with their patients, alcohol consumption drops and stays down.

Whether it’s beer during Thanksgiving football games, spiked egg nog at holiday parties, or champagne on New Year’s Eve, there are plenty of opportunities to drink during the holidays. More chances to drink, however, means more chances to drink beyond healthy limits, or to drink and drive; a decision that’s just as dangerous for occasional drinkers as for dependent drinkers grappling with alcoholism.

“The holiday season can be an especially dangerous time on our nation’s roadways due to drunk drivers,” said former Transportation Secretary Ray LaHood in 2012. The National Highway Traffic Safety Administration (NHTSA) reports that drunk drivers caused more than 10,000 deaths in 2012, an increase of nearly 5% from 2011.

Just as law enforcement is on high alert to stop drunk drivers during the holidays, the country’s medical professionals are doing their part to help patients make safer choices about alcohol long before they get behind the wheel. To support doctors across the country, SIMmersion joined forces with the National Institute on Alcohol Abuse and Alcoholism (NIAAA) and researchers at the University of Wisconsin-Madison to create the Alcohol Screening & Brief Intervention simulation. This groundbreaking training program lets medical professionals talk to a simulated patient, Christy Johnson, about her potential for alcohol abuse and steps she can take to stay safe.

"Research shows that when doctors screen and intervene with their patients, alcohol consumption drops and stays down,” says Dale Olsen, PhD, President of SIMmersion. “But due to a training gap, many doctors were having problems talking about alcohol use effectively. Talking to Christy gives them realistic practice in what to say, when to say it, and how to say it to help patients change their behavior.”

In the simulation, Christy has come to the doctor’s office for treatment of a minor injury after a car accident. It’s up to the doctor playing the simulation to decide what screening questions to ask to determine her risk level for alcohol misuse, and what appropriate steps to take depending on the answers she gives.

Christy is portrayed in video by a professional actress, so speaking with her feels as real as a face-to-face conversation. Her responses vary from play to play, as does her level of alcohol misuse. For example, sometimes she’s a low-risk drinker who just needs support and encouragement to keep making safe choices. In other conversations, she’s a dependent drinker whose life is being seriously impacted by her alcoholism, and a referral to expert counselors is the healthiest path forward for her. Because SIMmersion’s PeopleSim technology provides Christy with life-like emotions, the quality of the doctor’s “bedside manner” during the entire conversation has a huge impact on how forthcoming and friendly she is. The variety of realistic responses Christy brings to the conversation makes the training highly applicable to interventions with real-world patients.

In addition to the conversation with Christy, the training system includes extensive e-learning drawn from NIAAA research which doctors can review at any time. An on-screen coach offers feedback on everything said during the conversation to make the most of every teachable moment. In a comprehensive after-action review, doctors can see measures of their performance and receive constructive feedback on how to improve. “The freedom to make mistakes is a huge part of learning,” says Dr. Olsen. “It’s much better for doctors to make those mistakes in a SIMmersion system than by trial-and-error on real patients.”

A study at the University of Wisconsin-Madison found that medical professionals who trained with the Alcohol Screening and Brief Intervention simulation were significantly more effective at screening and intervening with human patients than practitioners who didn’t receive the training. “The reviewers who watched the videotaped appointments could tell which doctors had taken the training, and which doctors hadn’t,” says Dr. Paul Grossberg, MD, of the University of Wisconsin-Madison.

Since Alcohol Screening and Brief Intervention is now online at http://www.SIMmersion.com/portal and is accessible to doctors anywhere, more patients than ever may be receiving the benefits of a supportive intervention about their drinking as the holiday season begins. That’s something all of us can celebrate.

About SIMmersion
SIMmersion’s mission is to train communication skills faster and more effectively by combining the world's most realistic simulated experiences with highly interactive training content and extensive user feedback. For more information, contact SIMmersion online or call at 443-283-2555.