Walter P Moore Board Appoints Dilip Choudhuri as Next CEO

Leadership transition to prepare for the firm’s next growth stage 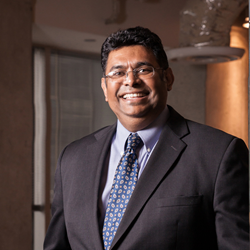 Dilip’s proven leadership, broad world view, and strategic insight were at the core of why he was selected as President and CEO. He was the unanimous choice to lead our innovative firm to future growth.

“Dilip’s proven leadership, broad world view, and strategic insight were at the core of why he was selected as President and CEO. He was the unanimous choice to lead our innovative firm to future growth,” said Messer, who has served as CEO for the firm since 1993.

With over 12 years at Walter P Moore, Choudhuri brings proven leadership and high-performance results to his role as CEO. An established industry expert in structural diagnostics, Choudhuri joined the firm in 2001. By the time he became Executive Director of Diagnostics in 2009, the Group had quadrupled its staff and increased revenue by 400%.

Since becoming Executive Director, Choudhuri has led the Diagnostics Group through a re-branding and built a cohesive suite of specialty practice areas including Building Enclosure, Forensics Analysis, Vibration Testing, Corrosion, and Structural Health Monitoring. The Group has continued to thrive and grow under Choudhuri’s leadership, even during challenging years.

As the company’s new CEO, Choudhuri will be responsible for the firm’s strategy, growth, and performance. Together with his diverse background, Choudhuri’s business acumen and collaborative approach bring a unique perspective to his leadership. Over the coming months, Choudhuri will work closely with Messer and other firm leaders and office locations to ensure a smooth and well-executed transition. Mr. Messer will take on a new role at Walter P Moore in which he will help implement the company’s strategic growth plan for the future.

About Walter P Moore
Walter P Moore is an international company of engineers, innovators, and creative people who solve some of the world’s most complex structural and infrastructural challenges. Providing structural, diagnostics, civil, traffic, transportation engineering, and parking consulting services, we engineer solutions for the built environment that are cost- and resource-efficient, forward-thinking, and help support and shape our communities. Founded in 1931, we are headquartered in Houston, Texas and have more than 300 professionals working across 13 U.S. offices and 5 international locations.

Editor’s Note: There is no period after the P in Walter P Moore.