To provide a safe place for Warriors dealing with addiction and PTSD, Warriors Heart announces it will open a private treatment center just for warriors outside of San Antonio, Texas, in early 2016. 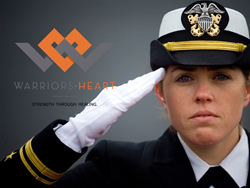 In sync with Veterans Day (Nov 11, 2015), Warriors Heart announces the first dedicated private healing center in the U.S. will open just outside San Antonio, Texas, in early 2016. The focus of Warriors Heart is to serve the men and women who are warriors: veterans, military, first responders, police, other law enforcement agencies and civilian warriors.

There are currently some facilities that offer a healing “track” for Warriors, but the treatment is mixed with other citizens. Warriors Heart will be the first to offer treatment to just warriors.

Warriors Heart is providing a peer-to peer based solution to help the over 13 million American Military, Veterans, Law Enforcement and First Responders faced with the self-medicating struggles of alcohol addiction, prescription and drug addiction and PTSD (post traumatic stress disorder),

Warriors Heart programs will include Residential Treatment, Day Treatment, Outpatient and Sober Living for 18 and older men and women, built by a strong clinical team. A Warriors Heart Foundation has also been set up to help those who deserve additional assistance in paying for private treatment. Anyone can donate and/or buy Warriors Heart merchandise now to support the foundation.

Through a partnership with Operation Overwatch, founded by Former Marine Brice Cavanaugh who has done Presidential K9 Support and is an expert in training dogs, Warriors Heart will also have Service Dogs. These specially trained dogs will help warriors during treatment, and they will have the option to take them home afterwards if a Service Dog will assist in their healing.

Warriors Heart has teamed up with Mission 22 as the solution side to their awareness campaign. Mission 22 brings the awareness of 22 veterans committing suicide a day to our communities with Warriors Heart providing the addiction and PTSD treatment option for those suffering.

And here are just a few of the reasons why Warriors Heart is so desperately needed in the U.S.:

This is not just a military or law enforcement problem, it is an American problem and Warriors Heart is proud to be a part of the solution to assist those who have selflessly served.

About the Warriors Heart Founders:

Josh and Lisa Lannon have a strong WHY for opening Warriors Heart. The couple founded Journey Healing Centers (residential treatment centers in Arizona and Utah) in 2002, which was later sold to Elements Behavioral Health in 2013. Warriors Heart will be their 7th healing center.

Josh Lannon ran award-winning nightclubs in Las Vegas. After too many benders, his wife and former Law Enforcement Officer Lisa Lannon gave him the ultimatum to go to treatment or else the marriage was over. After Josh completed his treatment, the Lannons dedicated their lives to helping others heal from addiction.

Special Forces Tom Spooner joins the Lannons as the third founder of Warriors Heart. Tom knows first-hand the pain of the warriors returning from Iraq and Afghanistan. After serving 21 years in the U.S. Army, Tom has dealt with PTSD and TBI (Traumatic Brain Injury). During Tom’s military career that included 3+ years of direct action combat deployments, he was able to accomplish what less than .001% of US military personnel have by becoming a Delta Force Operator. After retiring from the military, Tom cofounded Mission 22 with Magnus Johnson and Mike Kissel.

In addition to these rock solid founders, retired Law Enforcement Officer Chris DeMeo is the Warriors Heart Admission Advocate. While the Warriors Heart facility is not yet physically open, help line calls are currently being answered by Warriors 24x7, and the team can help those seeking treatment through their referral network today.