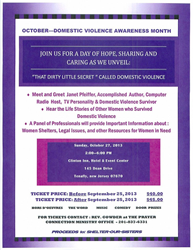 We need to all come together to become educated, to become familiar with how to deal with the situation and how to keep men, women and children, who might be victims of domestic violence, safe.

New Jersey family law attorney Bari Weinberger will be a featured panelist at the upcoming symposium “That Dirty Little Secret” Called Domestic Violence. The event, scheduled for Sunday, October 27, 2 pm – 6pm, at the Clinton Inn in Tenafly, is an educational forum for anyone interested in preventing domestic violence and providing assistance for domestic violence victims. It is also a fundraiser for Shelter Our Sisters, New Jersey’s leading full-service agency for victims of domestic violence and the only agency in Bergen County that provides emergency shelter.

Over the past year, Weinberger Law Group, the law firm founded by Ms. Weinberger, has taken a lead role in disseminating free legal information for those affected by domestic violence. Via the law firm’s website, victims can access information concerning how to file for temporary restraining orders, including the ability to see the actual forms they will need to fill out in court or at the police station.

According to Weinberger, “It might seem basic, but until we put the step-by-step process of how to file for a temporary restraining order in New Jersey on our website, this information just wasn’t out there. We have received so much positive feedback from shelters and other groups who regularly share this information with the people they help.”

In New Jersey, it is estimated that each year over 70,000 domestic violence crimes are reported to the police, with an untold number of cases left unreported. The timing of this year’s symposium is a deliberate way to bring awareness to Domestic Violence Awareness Month, held every October. At the “Dirty Little Secret” event, Weinberger will join a panel composed of experts and first-person witnesses to domestic violence.

Highlights of the evening include an opportunity to:

The event also includes: hors d’oeuvres, music, comedy and door prizes. All proceeds will go to Shelter our Sisters. For more details, and to buy tickets, please call 201-837-6331.