“What Have I Done?” a single song by Darrin Charles, is set for release early 2020.

Nominated singer songwriter Darrin Charles finally gets a release date for his song "What Have I Done", January 3rd 2020 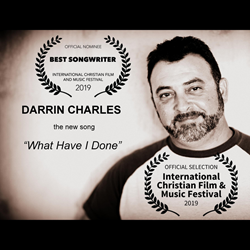 "I am overjoyed that we are finally releasing the song, some people really need to hear it"

Darrin Charles, a singer-songwriter and artist from the New Port Richey, Florida area, has announced a record deal with the new David & Goliath Media Publishing Firm, LLC., which will include his first single “What Have I Done?” scheduled for release on January 3rd, 2020.

The song was officially selected at Orlando’s International Christian Film and Music Festival last Spring. The song also garnered Darrin a nomination as “Best Songwriter,” making the top twelve positions out of a field of 800-1000 artists who submitted songs.

A special 38-second free sample of the song will be available at his website http://www.darrincharlesmusic.com this week. A decision was made to release it to Spotify and iTunes, including a few others, two weeks ago.

When Darrin Charles releases his new song using lyrics that touch on spiritual themes along with “everyday situations of life,” he will take his place among the rarified air of song writers who possess that uncommon knack for probing in to both secular and spiritual themes simultaneously. Charles was first recorded in 2003 inside a mall recording booth in New Port Richey, Florida. Darrin is over 40 in an industry where most new artists are less than 25. Also, Darrin is currently a wood worker at a cabinet shop and says "I am overjoyed that we are finally releasing the song, some people really need to hear it"

In his first song “What Have I Done?” Darrin asks his audience the vital question almost everyone ponders in their heart: “How could God love such an imperfect being like me? And how can any of us ever deserve such kindness from the Creator of the Universe?” claims CEO Joseph A. Camerieri of the Independent label David & Goliath Media Publishing Firm, LLC. Joseph is also the executive producer of the song. Joseph says, “In my circles, people agree with my analogy that it’s a Spiritual prequel or point of view to that most successful Christian song ‘I Can Only Imagine’ by Mercy Me. I am a huge fan of that song in which it brings tears to my eyes all the time, and with Darrin’s song too.”

Despite his high level of excitement, the last few years for Darrin have included significant trials. However, regarding his selection at the Music Festival in Orlando, Charles says “It was a huge blessing, a light for my path set before me. I was very grateful just to be selected, I love songwriting and singing so I am very happy. I have a lot of people to thank and first is of course, with sincerity, God and Jesus the Christ, who opened doors and hearts of people to make this song a reality.”