A recent study by Queendom.com reveals that, along with wayward thoughts and obsessive over-thinking, ruminators struggle with self-esteem issues, a pessimistic outlook, and a lack of resilience. 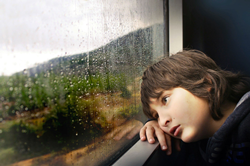 Ruminators’ proclivity for over-thinking things and creating problems where none exist, comes at a significant emotional and psychological cost.

Rumination is like a line of dominoes: You have a negative thought that then feeds and breeds another, and then another.

The potential of the human brain seems limitless. We have the ability to learn and process complex information, store memories, as well as strategize and plan. In a world of instant messaging and people who intentionally film themselves doing painfully stupid things, the ability to deliberate carefully before taking action should be praised, should it not? But even thinking can be taken too far. Extreme rumination is the tendency to engage in repetitive and obsessive negative thinking.

Analyzing data collected from 1,123 ruminators who took the Emotional Intelligence Test, Queendom researchers attempted to answer one seemingly simple question: What was it like to be in the mind of a ruminator? What they discovered was a world of chaos and spiraling negativity.

INABILITY TO LIVE IN THE MOMENT
Keeping their mind in the present and being mindful is a struggle for ruminators.


A PESSIMISTIC AND CYNICAL OUTLOOK
Ruminators tend to view their life and the world through a rather dark filter.


LACK OF RESILIENCE
Ruminators struggle to adapt to life’s ups and downs, and to move on from disappointments and hardships.


SELF-ESTEEM AND CONFIDENCE ISSUES
Along with their sense of helplessness, many ruminators struggle with self-acceptance.


“Ruminating tends to follow one of two patterns,” explains Dr. Jerabek, president of PsychTests, the parent company of Queendom. “The first pattern is like a line of dominoes: You have a negative thought that then feeds and breeds another, and then another. So let’s say that a colleague snubs you during a meeting. If you are a ruminator, you will immediately jump to the conclusion that his behavior had a hidden agenda. You start thinking about all your recent interactions with the person, trying to figure out what you could have done to deserve that treatment. Suddenly, your mind sprints through all your recent tasks, looking for an error. You find nothing, so you figure the person must not like you. Like that colleague who avoided you because she didn’t want to confront you about something you did. Or that guy who stood you up 5 years ago. Or the little girl who refused to play with you in 3rd grade. And round and round, the wild train goes. Then you realize that it’s 3AM and you have to get up at 6:30, and now you’re worrying about the fact that you can’t sleep, that you will be so tired in the morning, and your boss will see how tired you are, and off you go again. So what seemed like one problem propagates into a million other ones.”

“The second pattern feels like you’re being engulfed by negativity and worry. It feels like a wave crashed into you, and you are drowning in impending doom. This is where your thoughts are completely occupied by a problem, to the point where you lose sleep, lose focus, and cannot think about anything else except what’s bothering you. Yet, all that thinking yields no solution. This obsessive tendency to worry and over-think things can lead to major self-esteem issues, as well as anxiety and depression.”

So the question is, how does one stop a runaway train of thought? The answer, according to Queendom researchers, is by breaking the pattern. Here’s how:


Want to assess your EQ? Check out our Emotional Intelligence Test at
https://www.queendom.com/tests/access_page/index.htm?idRegTest=3978

Professional users, such as therapists and coaches, can request a free demo for this or other assessments from ARCH Profile’s extensive battery: http://hrtests.archprofile.com/testdrive_gen_1

There’s a major difference between giving a problem its due consideration, and ruminating.Here are some of the issues that ruminators struggle with: