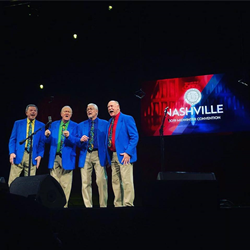 They judge the groups on singing ability, presentation, vowel and blend match within your group. Out of the 26 groups, we were judged No. 10. It was an honor to represent our senior division.

Former teacher and coach Raze is a local Realtor who just returned from singing at Nashville’s Grand Ole Opry. Raze is part of a barbershop quartet called Social Insecurity. Raze is also a member of the Barbershop Harmony Society, which hosted their Midwinter Convention called “Everyone In Harmony” in Nashville. The six-day event celebrated “the inclusion of women into Barbershop, African American-rooted history, education for all ages, and community unity.”

According to the Society’s Website, “Founded in 1938 as the Society for the Preservation and Encouragement of Barber Shop Quartet Singing in America, Inc. (SPEBSQSA), the Barbershop Harmony Society (BHS) preserves and extends the reach of a uniquely American close harmony musical art form whose roots lie in African-American improvisation and European harmony traditions.”

“First, we competed in our Northwest senior division (55+), which incorporates Oregon, Washington, Idaho, British Columbia and a few from Montana,” said Raze, “My quartet won the contest and earned the right to compete against the 25 other top quartets from around the U.S. and Canada in Nashville at the Grand Ole Opry.”

Raze’s quartet sang two songs and were judged by a nine-member judging panel. “They judge the groups on singing ability, presentation, vowel and blend match within your group,” Raze explained. “Out of the 26 groups, we were judged No. 10. It was an honor to represent our senior division.”

Raze is currently singing in a local chorus and two quartets that perform all over the United States and Canada. “Here’s a cool fact,” Raze added, “Dick Van Dyke, from the CBS television sitcom, ‘The Dick Van Dyke Show,’ and Mike Rowe, from the hit show ‘Dirty Jobs,’ are members of the barbershop society and Dick is singing in a barbershop quartet of his own.” Raze is not new to performing. He is often recognized by his nearly 20 humorous Northwest commercials (Les Schwab).

After teaching middle school for 32 years, Raze became active in the real estate world in 2005. He is a past president of the the Million Dollar Club of Lane County, which has 120 members out of 1,500 agents in Lane County. “For seven straight years, I have had the fortune of being in the top 2% of all Realtors throughout the United States and Canada,” concluded Raze.

About Gary Raze, RE/MAX Integrity
Gary Raze is dedicated to helping people find homes in Lane County. For the past several years he has been ranked as one of the top agents across the nation for residential sales because he knows how to get clients the results they are looking for. For more information, please call (541) 554-5825, or visit http://garyrazehomes.com/. RE/MAX Integrity is located at 4710 Village Plaza Loop, Suite 200, Eugene, OR 97401.