Cable reels and jack stands are no longer necessary, as Tug-Wise continues to see massive success with its proprietary cable management system that makes working with cables much more simple. 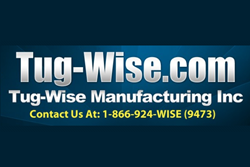 With a heavy background as an electrician, I was able to distinctly recognize the primary issues and offer a product that electricians can benefit from.

Tug-Wise is proud to announce that, due to the increasing popularity of its wire management system, cable reel jack stands are becoming a long-gone technology of the past. With the Tug-Wise proprietary system, electricians and other professionals will find a much more streamlined process to reeling wire. With traditional cable reel jack stands, there are several cons that can set you back. Not only does it require more manual labor and at least two people, but it’s more expensive, time-consuming and complex.

Jim Emes, founder of Tug-Wise, has been an electrician for over thirty years and saw the problems that cable reel jack stands have. He knew that many others had the same difficulties, and came up with a solution for a system that he and other professionals could benefit from.

“We’ve been seeing great success with Tug-Wise because it solves a problem many people have noticed,” says Emes. “With a heavy background as an electrician, I was able to distinctly recognize the primary issues and offer a product that electricians can benefit from. No more heavy lifting or awkward set-up required – it’s like a lazy Susan for your reel.”

The Tug-Wise cable management system is replacing cable reels and jack stands because it eliminates its common flaws. Tug-Wise is durable, allowing it last for many years and withstand any weather condition. It is offered in high-quality models that hold between 500 to 1500 lbs., or heavy-duty models that can support 6,000 lbs. Designed to promote a one-man operation, the Tug-Wise wire management system is easy to set up and operate. Unlike a cable reel stand, the Tug-Wise offers 360 degree pulling, versus having to be manually moved and pointed in the direction of each pull. Not only does it provide the consumer with value, but is also extremely safe. It can be mounted to the bottom of a wooden or plastic reel to allow for simple pulls.