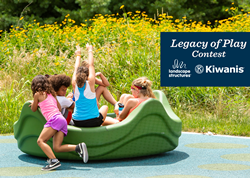 “The reason we are doing this project is for all of our kids to have a fun and safe place to be themselves."

The playground in the center of Barron, Wis., will soon welcome kids and adults of all ages and abilities thanks to the work of the Kiwanis Club of Barron and the kids who will use it.

“Really!” said Andrew Sloan, vice president of the Kiwanis Club of Barron when told his club had won the Legacy of Play contest sponsored by Landscape Structures and Kiwanis International. “Oh, my goodness! That’s so exciting, that’s great news.”

The Barron club was one of 36 Kiwanis clubs that entered the contest for $25,000 in playground equipment to be furnished by Landscape Structures. A panel of judges agreed the plan to update Anderson Park was the best entry in the sixth annual contest cosponsored by Landscape Structures and Kiwanis. The entry noted the inclusive playground would be a gathering space for children of all abilities in the community and its central location was a natural gathering place. It also garnered the most votes—3,148—in public voting for the contest.

“This has sparked a lot of interest in our community and has really given us a good diving board to launch this fundraising campaign,” Sloan said. The community has raised nearly half of its $200,000 goal and has support from local businesses including the Mayo Clinic, Jenni-O Turkey Store, the Barron Community Fund and the city.

Kiwanians worked with the local Boys and Girls Club to get input from future users – the kids. “The reason we are doing this project is for all of our kids to have a fun and safe place to be themselves, so we wanted to ensure they had input in the playground design,” Sloan said.

Civic leader Mo Tollman said the partnership with the Kiwanis club was a key to success for the project. “I saw a need, and instead of going it all alone, we partnered with the Kiwanis club for this and they graciously accepted,” she said. Tollman and Sloan received the call from Landscape Structures and Kiwanis announcing Barron as the contest winner.

A member of the city council, Tollman said her involvement began as a concerned grandma. The park has new pavilions, an outdoor pool, a little league ballfield, and tennis and soccer courts. The playground equipment, at about 50-years-old, had become unsafe and was not accessible to all kids.

In the entry submission, Sloan noted the city would match up to $175,000 of the project and will maintain the playground.
About 20% of the children in Barron, a community of 3,000 in northwest Wisconsin, have special needs. More than 50% of the children qualify for the free or reduced lunch program, statistics that encouraged the Kiwanis club to create a park that children can enjoy regardless of their abilities and socio-economic status.

Sloan, business manager for the Barron Area School District, says the club was committed to the playground before learning about the Legacy of Play contest. The opportunity to win the equipment strengthened the project.

Landscape Structures, headquartered in Delano, Minn., is a leading manufacturer of commercial playground equipment and works with communities of all sizes to develop spaces that encourage play for adults and children of all abilities.

“On behalf of Landscape Structures, I would like to congratulate the Kiwanis Club of Barron on winning the Legacy of Play contest,” said Pat Faust, president of Landscape Structures. “We look forward to working with the club members and the community of Barron to bring to life this idea of an inclusive playground that will welcome children and families of all abilities.”

The Legacy of Play Contest began in 2013 to encourage Kiwanis clubs to bring play and playgrounds to communities around the world. Kiwanis International, headquartered in Indianapolis, Ind., is a global organization of members of all ages, dedicated to serving the children of the world.

“Kiwanis International is delighted to award the Kiwanis Club of Barron US $25,000 in playground equipment to help build a new inclusive playground,” said 2018-19 Kiwanis International President Poly Lat. “Kids need Kiwanis, and this playground will give children of all abilities the opportunity to play together, and become a welcome destination point for families and children.”

Sloan said the club has been developing the playground since 2017 and has completed preliminary preparation of the site. The stakeholders are completing the timeline for construction, which should take place within the next year. Plans call for a community build that would include Kiwanis club members, community members and the local school district.

To find a Kiwanis club near you, go to kiwanis.org/findaclub.

About Landscape Structures Inc.
Since 1971, Landscape Structures Inc. has been the leading manufacturer of commercial playground equipment in the world. Our employee-owned company designs community and school playgrounds that encourage kids of all ages and abilities to learn persistence, leadership, competition, bravery, support and empathy through play. We push the limits—of design, inclusion, play—to help kids realize there is no limit to what they can do today and in the future. For a better tomorrow, we play today. To bring a Landscape Structures playground to your community, visit playlsi.com.