Single women comprise a huge segments of home buyers, according to a report released by the National Association of Realtors and recent U.S. Census data. Home Destination, a Minneapolis residential Realtor with RE/MAX Results comments on the findings and offers a view on why single women real estate buyers are so successful. 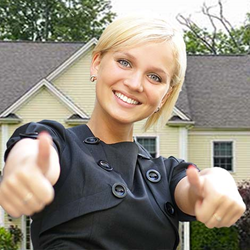 "The popularization of the solo life — in 1970, one-person households comprised just 17% of all households — is a historic change in human society." ~ sociologist Eric Klinenberg

Single-family homes are purchased more often by single women real estate buyers, according to a new report released yesterday from the National Association of REALTORS® (NAR). Increasing numbers of Americans are choosing to live single and as the only one living in the home. Single real estate buyers consist of a full quarter of all home purchases last year. In the U.S., there are 33 million one-person households, and living solo is becoming an international trend. Women are showing their power in real estate buying numbers.

"We seem to find that single women are more proactive in planning for their financial future and often approach a home purchase in a smart and organized manner," says Jenna Thuening, owner of Home Destination. "When they enlist a Realtor, women real estate buyers often already know what they want and how to go about trying to accomplish it."

According to Realtor.org, Eric Klinenberg, a sociologist and author of "Going Solo: The Extraordinary Rise and Surprising Appeal of Living Alone," says that young adults ages 18 to 34 are the fastest-growing group of people living alone. One-person households are also mostly women: 18 million women live alone versus 14 million men. The majority of solo single-family households are in cities and metro areas.

The biggest hurdle for most home buyers is qualifying for a mortgage. The reality for some married home mortgage applicants is that they are dragged down by a partner's credit score, loans or credit card debt. One applicant can get stuck with a higher interest rate due to the others low credit score. "When a consumer co-signs on a credit application for a friend or family member that debt becomes the consumers debt and is counted towards the overall debt ratio of the borrower. We need to collect 12 months of cancelled checks from the paying debtor to prove that the co-signer is not responsible for making the monthly payments if we need to remove the payment from the ratio calculation," says Craig Tashjian, vice president at Fairway Independent Mortgage in Needham, Mass. He may be offering a viable glimpse into why single women home buyers may be able to miss entanglements that slow a home purchase timeline.

A recent July study conducted by Redfin on what single women want when house hunting, reveals that single females have long been big consumers of real estate. Among unmarried home owners, single women have outnumbered men since at least 1982, when the Census began collecting such data. While middle-aged women home buyers are increasing their purchasing power, women younger than 35 appear to be choosing to delay home ownership until later on in life, the report shows.

"It may be that the average single women finds it more interesting than single men to fully understanding the process of buying a home. More often they reach out for our guidance and thereby gain a good advocate to assist their home purchase,” adds Thuening.