In honor of National Women’s History Month in March, Outliers Publishing announces the next book in the Outlier Series will be aimed at highlighting women “outliers." 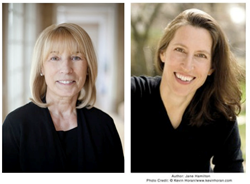 Masha Ternus (left), Iowa State's first woman supreme court justice, and Jane Hamilton (right), author of "A Map of the World" as seen on Oprah's Book Club. Both women are featured in the new Outlier

According to Dr. Shufeldt, the goal of the third book in the Outlier Series, highlighting women is to act as a surrogate mentor for young ladies, and anyone out there, man or woman, looking to achieve more than they previously imagined was possible.

In honor of National Women’s History Month in March, Outliers Publishing announced today the next book in the Outlier Series will be aimed at highlighting women “outliers”.

The title of the new book will be announced in late March 2014, and the book will be published in April 2014. The book is the third in the Outlier Series by author John Shufeldt, and will be available in eBook, paperback and hardcover formats. The book will highlight influential women who broke the confines of the ordinary and joined the ranks of the outliers.

Author John Shufeldt defines an outlier as “an exceptional person for whom excellence is merely a starting point toward a destination far beyond our normal definition of achievement.” The book will highlight six women who encompass the traits of an outlier identified over thirty years of author John Shufeldt’s career.

The third book in the Outlier Series is preceded by Ingredients of Outliers: A Recipe for personal Achievement, published in July 2013 and Ingredients of Young Outliers: Achieving Your Most Amazing Future, which is scheduled to publish in mid-March, 2014.

The book was inspired by several women encountered by Shufeldy who exemplify the qualities of outliers and deserve to be highlighted. Among whom is Jane Hamilton, author of A Map of the World, of Oprah’s Book Club Collection, and Marsha Turnus, the first woman to serve as chief justice of Iowa’s highest court.

According to Dr. Shufeldt, the goal of the third book in the Outlier Series in highlighting women is to act as a surrogate mentor for young ladies, and anyone out there, man or woman, looking to achieve more than they previously imagined was possible.

“Everyone needs a mentor, whether virtual or otherwise in order to spur each other on to achieve their goals,” said Shufeldt.

Along the same vain as its predecessor, Ingredients of Outliers, the third book in the series is packed with advice and inspirational stories from “outliers," in this case exemplary and influential women. These stories are also accompanied by chapters on John’s personal experiences and endeavors.

After the third book’s publication in April, the Outlier Series will publish at least 8 other books. The books are intended for students, college graduates and anyone interested in entering or furthering their career. The goal of the series is to offer books specific to sought after career fields with insider information and recommended channels for pursuing that career from experts in each respective profession.

The career fields include but are not limited to: Medicine, Law, Sports, Design / Engineering, The Arts / Entertainment, Entrepreneurism / Business, Service to Country/ Service to Mankind, Writing / Journalism, and Travel / Leisure.

About the Author:
As well as being a practicing doctor and lawyer, John Shufeldt is also a pilot (both plane and helicopter) and a business entrepreneur (and if pressed, he will reluctantly admit to being a ‘budding’ chef and taekwondo black belt).
Shufeldt received his BA from Drake University in 1982 and his MD from the University of Health Sciences/ The Chicago Medical School in 1986. He completed his Emergency Medicine Residency at Christ Hospital and Medical Center in 1989 where he spent his final year as Chief Resident.

He received his MBA in 1995, and his Juris Doctorate in 2005, both from Arizona State University. He is admitted to the State Bar in Arizona, the Federal District Court and Supreme Court of the United States. Shufeldt is also an adjunct professor at the Sandra Day O’Connor College of Law where he teaches a clinic on Health Law Entrepreneurism. He serves on the Drake University Board of Trustees and the Sandra Day O’Conner College of Law Alumni Board

To learn more information about upcoming books in the Outlier Series, visit http://www.ingredientsofoutliersblog.com