On November 9 and 10 Woodcraft retail stores nationwide will welcome volunteers who come to make one-of-a-kind pens for military personnel. 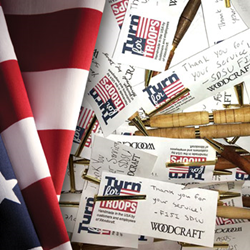 “Without volunteers – from the public and Woodcraft employees – the Turn for Troops program could not reach out to thousands of military personnel annually.”

Woodcraft is preparing for its 16th Turn for Troops National Turn-a-Thon on November 9 and 10. Woodcraft retail stores throughout the US will host Turn-a-Thons and invite volunteers to come and make unique gifts for military personnel on active duty and recovering in rehabilitation facilities.

During 2018, a total of 17,097 one-of-a-kind wood pens were turned, bringing the 15-year total to 175,224. In addition to the annual Turn-a-Thons, some stores hold turning events at other times during the year, and some groups and individuals turn pens all year to donate to Turn for Troops.

“Woodcraft encourages anyone interested in making a special thank-you gift for a man or woman serving in the military to become a volunteer pen turner for a day at your local Woodcraft store,” Woodcraft President and CEO Jack Bigger said. “Without volunteers – from the public and Woodcraft employees – the Turn for Troops program could not reach out to thousands of military personnel annually.”

Two “Woodworking Adventures” blogs also include instructions for how to turn pens: Pen Turning 101 and A Great Start for Basic Pen Turning.

Pen makers are encouraged to include notes with their thank-you gift pens. In addition to thanking the military man or woman for their service, notes sometimes include the type of wood used to turn the pen and contact information for the maker. In return, recipients of the pens often send notes of appreciation for their pen gifts.

Sometimes pen recipients become pen makers. Pens made at the 2016 Turn for Troops Turn-A-Thon – 4,840 – were sent to sailors aboard the USS H.W. Bush. Navy Captain Will Pennington, a pen recipient, then showed up at the Virginia Beach Woodcraft store in 2017 as a volunteer to make pens for his military comrades.

Each year, after pens begin arriving from the stores, Woodcraft personnel at the corporate office check with their military contacts about where to send the new batch of pens. Sometimes stores will suggest where to send some pens, and sometimes military personnel will reach out to Woodcraft after reading publicity about the annual event.