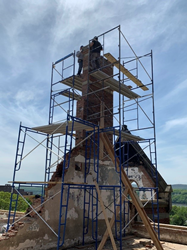 Work is under way to preserve the historic Kirkbride Building at the $300 million Hudson Heritage development in the Town of Poughkeepsie, N.Y.

“The safety of our workers and community residents is our number-one priority,” said Martin Berger, Development Manager with EFG/Saber Heritage.

Developers are undertaking substantial demolition and renovation work as they move forward with the Hudson Heritage mixed-use community being developed on 156 acres on Route 9 across from Marist College. The $300 million project will include housing, a hotel and conference center, retail, a supermarket, restaurants, entertainment, and medical and office space.

The site was home to the Hudson River State Hospital and features magnificent architecture, including an impressive High Victorian Gothic building – the “Kirkbride” – named after a prominent doctor for the mentally ill. The administrative building was severely damaged by fire in 2018 and is undergoing a significant restoration, including the installation of more than 360 windows and a new roof, all in keeping with the original architecture. Developers EFG/Saber Heritage SC, LLC intend for the restored Kirkbride to serve as a dominant structure overlooking the Great Lawn designed by Frederick Law Olmsted and Calvert Vaux, as it had for decades.

Simultaneously, demolition is under way on the Clarence O. Cheney Building, one of Dutchess County’s most storied structures and the last building to be demolished to make way for the commercial component of Hudson Heritage. Expert crews are using machines to dismantle the 360,000-square-foot, 12-story steel and brick building that once housed medical staff and patients of the renowned psychiatric facility. The state hospital operated from 1873 until its closure in 2012 and most of the buildings, like Cheney, are structurally unsound.

“The safety of our workers and community residents is our number-one priority,” said Martin Berger, Development Manager with EFG/Saber Heritage. “Nearly all of the materials of the former Cheney building will be recycled and the concrete will be crushed, processed and used on site to avoid the need for thousands of truckloads of import. We also understand the historic significance of this site, and have worked closely with historians to maintain the integrity of the property and respect its celebrated past by restoring six structures and re-using architectural elements of the past in the architecture of the new.”

EFG/Saber Heritage has been consulting with the town’s Historic Preservation Commission to preserve artifacts and incorporate elements of the original architecture into Hudson Heritage, which is being designed as an intergenerational community with 750 residential units, including assisted-living. The property will feature a 150-room hotel and conference center; 350,000 square feet of commercial and retail space, shops, restaurants, and a fitness center; 40,000 square feet of urgent and primary care medical facility/office space; a 24,700-square-foot education/performing arts center; walking trails and more than 60 acres of open parkland.

Set against the backdrop of the majestic Hudson River, the property offers spectacular views and beautiful grounds designed by Frederick Law Olmsted and Calvert Vaux, who designed Central Park in Manhattan. The campus architecture was designed as part of a treatment philosophy to incorporate aesthetics and natural beauty into care of the mentally ill. Designed by Vaux, Withers & Co., the Kirkbride is named after Philadelphia doctor Thomas Story Kirkbride, who believed the environment played a key role in treatment. In addition to the Kirkbride, EFG/Saber Heritage is preserving five other buildings for adaptive reuse and restoring the Great Lawn. The Cheney building, designed by architect John Peterkin, is named for hospital superintendent Dr. Clarence O. Cheney and has stood high atop the campus since 1952. It housed the Hudson River State Hospital School of Nursing along with a lab, library and offices. Cheney was vacated in 2000 and the hospital officially closed in 2012.

The Hudson Heritage site is neighbored by Marist College, Health Quest, Vassar Brothers Medical Center and the Culinary Institute of America, providing a winning combination of “Eds and Meds” for economic viability. Once completed, Hudson Heritage will create 750 permanent jobs and generate $8 million in annual property taxes, including $2 million to the town. Construction is expected to take three to six years. Charter Realty & Development of Westport, Conn., is handling commercial leasing at Hudson Heritage.

Expert crews are using machines to demolish the Clarence O. Cheney building at the $300 million Hudson Heritage development in the Town of Poughkeepsie, N.Y.