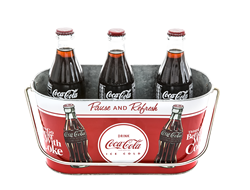 "It was only after Coca-Cola created a strong bottling system that it became a world famous brand." said Scott Cooper, CEO & Creative Director of World Patent Marketing, "In this case we were just plain lucky."

World Patent Marketing, the world's fastest growing vertically integrated manufacturer of patented products, announces the development of the Cooler Companion The Cooler Companion is a clever new invention that prevents glass breakage. This development coincides with the commemoration of the 100th year of the classic Coca Cola bottle design.

"It was only after Coca-Cola created a strong bottling system that it became a world famous brand," said Scott Cooper, CEO & Creative Director of World Patent Marketing, "These bottles were extremely popular but have become collectors items. We could not have picked a more perfect time for this announcement. In this case we were just plain lucky."

This glass bottle patent comes as Coca Cola marks 100 years of soda’s iconic glass bottle with their distinctive Mae West design. These bottles first came out in 1915, and the company has not looked back since then. The only major difference between today's bottles and the original design is the bottle material itself. The original bottle was made of glass, while majority of today's Coca-Cola is sold in plastic bottles primarily because of glass breakage issues. An invention like the Cooler Companion can easily solve this problem and welcome the return of glass bottles.

“The design protects the glass bottles from breakage," says David P., the inventor of this glass bottle patent, "As a general rule, beverages taste better in glass bottles, as aluminum cans impart a slight taste to the contents.”

“This can greatly improve the taste of beer,” says Schmidt, a beverage blogger from Wisconsin. “Beer in dark amber glass bottles tastes better than the same beer in cans. A glass bottle patent such as the Cooler Companion will help prevent breakage of glass bottles during transport as well as during cooling.”

The use of glass is also beneficial to the environment since it is easily recycled.