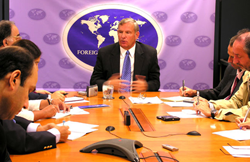 “Ambassador Dailey is a true hero,” said Scott Cooper, CEO and Creative Director of World Patent Marketing. “He has taken a leadership role in almost every major military action of the United States in the past 36 years.

Dailey is internationally famous for his actions and bravery during the Gulf wars. During his 36 years with the United States Army Special Ops, he became known for taking actions that were “unheard of” and went above and beyond the call of duty.

“I want to thank CEO Scott Cooper for giving me this opportunity to join the World Patent Marketing Advisory Board,” said Ambassador Dailey. “Since leaving public life, I focus on working with organizations that use their culture of innovation to help protect our planet and improve people’s lives. The work that World Patent Marketing and The Cooper Idea Foundation does in developing countries is inspiring and is a true model of corporate social responsibility.”

“Ambassador Dailey is a true hero,” said Scott Cooper, CEO and Creative Director of World Patent Marketing. “He has taken a leadership role in almost every major military action of the United States in the past 36 years. Ambassador Dailey will be an invaluable asset to us as we continue our warlike expansion around the globe.”

Dailey is known for his assertive no-nonsense personality. He was a member of Night Stalkers, a special ops unit in Operation Desert Storm, in which he personally led troops beyond enemy lines. His heroism earned him both applause from patriots and criticism from bureaucrats. Yet, his personal participation was vital to the mission’s success.
He has served as advisory to Secretary of the State and is well-connected with world leaders.

“I am proud that Ambassador Dailey has joined our team,” said Israeli Defense Forces General Nitzan Nuriel, who joined the World Patent Marketing Advisory Board in 2015. “Safety and security are the most challenging issues of our day. Winning the war against terror requires integrity and advanced technology. At World Patent Marketing we are committed to making the world safer, more secure and more prosperous.”

Ambassador Dailey joins the distinguished World Patent Marketing Advisory Board, where his expertise in counter-terrorism is be invaluable both to the company and the nation.

As a leader in patent invention services, World Patent Marketing is by your side every step of the way, utilizing our capital and experience to protect, prepare, and manufacture your new product idea and get it out to the market. Get a patent with World Patent Marketing and the company will send representatives to trade shows every month in order to further advocate for its clients. It is just part of the world patent marketing cost of doing business.

Dailey has on the ground terrorism experience.