Former US Attorney Matthew G. Whitaker Extends His Membership On The World Patent Marketing Advisory Board 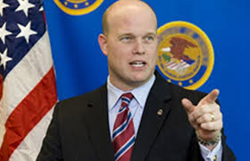 Matthew G. Whitaker, Former US Attorney and US Senate Candidate

"As a former US Attorney, I would only align myself with a first class organization. World Patent Marketing goes beyond making statements about doing business “ethically” and translates them into action.

World Patent Marketing, the world's fastest growing Patent and Inventor Services Organization (PAO), is pleased to announce that Matthew G. Whitaker, former Iowa US Attorney and Republican candidate for the United States Senate, has agreed to extend his membership on the World Patent Marketing Advisory Board.

"We are very appreciative of the guidance Matt has given us in 2014," said Scott Cooper, Managing Director of World Patent Marketing. "As we continue our global expansion, Matt's wisdom and understanding of international markets will be invaluable."

Matthew G. Whitaker is a former US Attorney for the Southern District of Iowa. He was appointed June 15, 2004 by President George W. Bush. Whitaker resigned in November 2009 following the appointment and confirmation of Nicholas A. Klinefledt, who was appointed by President Barack Obama.

As the United States Attorney for the Southern District of Iowa, Whitaker obtained invaluable insight and experience regarding the enforcement of federal crimes including mail and wire fraud, public corruption, child pornography, firearms violations, drug trafficking, corporate fraud, terrorism financing and other scams.

In addition, Whitaker was responsible for defending civil lawsuits brought against the United States, handling federal forfeiture actions, and collecting debts and restitution. Whitaker managed a staff of 60 with headquarters in Des Moines and two branch offices (Davenport and Council Bluffs).

Whitaker is a member of the University of Iowa Political Science Department Advisory Board and a member of the National Association of Former United States Attorneys. Whitaker lives in the Des Moines area with his family.