Forthcoming from Akashic Books and just in time for the holidays, international best-selling author Adam Mansbach captures the sentiments of frustrated parents once again. 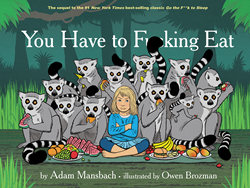 Just like GO THE F**K TO SLEEP, YOU HAVE TO F**KING EAT has a cover reminiscent of a children’s book—except both are adult-only bedtime stories!

"Eating is the other universal source of parental anxiety...it seemed like a topic folks could use a laugh and a bit of catharsis about." - Adam Mansbach, author of GO THE F**K TO SLEEP and YOU HAVE TO F**KING EAT

From the author of the international best-seller Go the F**k to Sleep comes the long-awaited sequel about the other great parental frustration: getting your little angel to eat something that even vaguely resembles a normal meal. Profane, loving, and deeply cathartic, You Have to F**king Eat (Akashic Books; on-sale: November 12, 2014; available for preorder everywhere books are sold; $14.95) breaks the code of child-rearing silence, giving moms and dads a much-needed chance to laugh about a universal problem. It’s also a perfect gift book, timed for release during the holiday season.

Says author Adam Mansbach, the unlikely spokesperson for a new generation of parents worldwide: “There’s been plenty of enthusiasm for a sequel over the years (and plenty of suggestions!) but I always said I’d only do one if it rang true to me—if I felt like I could imbue it with the same kind of honesty, love, and frustration as the first book. And eating is the other universal source of parental anxiety, a battle of wills just as pitched as sleep can be. From my own experiences and plenty of conversations with other parents, it seemed like a topic folks could use a laugh and a bit of catharsis about.”

Adam Mansbach once again teams up with Brooklyn-based independent publisher Akashic Books on this release, which features illustrations by Owen Brozman, whose art has appeared in Scholastic, Time Out New York, and National Geographic. Like the smash hit Go the F**k to Sleep, You Have to F**king Eat perfectly captures Mansbach’s trademark humor, which is simultaneously affectionate and radically honest. You probably shouldn’t read it to your kids.

ABOUT THE AUTHOR ADAM MANSBACH
Adam Mansbach is the author of the #1 international best seller Go the F**k to Sleep, as well as the novels Rage Is Back, Angry Black White Boy, The Dead Run, and The End of the Jews, winner of the California Book Award. He has written for the New Yorker, the New York Times, Esquire, the Believer, and National Public Radio’s All Things Considered. His daughter Vivien is six.

ABOUT THE ILLUSTRATOR OWEN BROZMAN
Owen Brozman has illustrated for National Geographic, Time Out New York, Scholastic, Ninja Tune, Definitive Jux, and numerous other clients. He and Mansbach recently collaborated on the acclaimed graphic novel Nature of the Beast, and his work has been recognized by the Society of Illustrators of Los Angeles, Creative Quarterly, 3x3 magazine, and many more. He lives in Brooklyn, New York, with his wife and daughter, whose favorite food is bananas.

PRAISE FOR GO THE F**K TO SLEEP
“A new bible for weary parents.”
—The New York Times

“The mother of all children’s books.”
—Today Show

“Nothing has driven home a certain truth about my generation, which is approaching the apex of its childbearing years, quite like this deranged book.”
—New Yorker

“An anthem for profane parents.”
—Time

“A parenting zeitgeist . . . A phenomenon that has stunned the publishing world and may just redefine the modern ‘parenting’ market.”
—Washington Post

“Perfectly timed, lightly applied touches of profanity are funny. Super funny. It’s especially the case when the profanity puts words to common feelings that we aren’t really allowed to own up to. Well, in that spirit comes this perfect little picture-book parody.”
—Booklist

Check out the first pages of You Have to F**king Eat here!