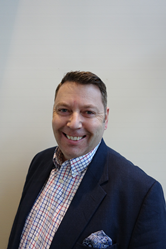 Zonar, the leader in smart fleet management technology, has enhanced the senior executive team with the addition of Gareth Wade as the new Chief Revenue Officer. Wade is an award-winning business and sales leader with more than 20 years of diverse global experience helping organizations increase revenue and build successful teams and programs. Wade is joining Zonar with a focus on revenue growth through direct sales, channel and reseller programs.

“This is an important time in our industry as both fleets and commercial vehicle OEMs are working to embrace and accelerate the digitization of their vehicles and businesses,” said Ian McKerlich, President and CEO at Zonar. “Gareth’s expertise in working with customers as they adopt new technologies as well as his ability to motivate and energize teams makes him the perfect addition to the Zonar family.”

Wade joins Zonar as a seasoned leader of technology companies and sales teams in the UK, across Europe and North America. Most recently he served as US Director of Business Development & Strategic Alliances for GCI Communication Corp. Previously he was Chief Sales Officer at content26, Director of Channels Sales at Polycom, Inc. and Principal Revenue Growth Consultant at OneAccord Partners.

Before re-locating to the US from Edinburgh in the United Kingdom, Wade served as the founding Sales & Marketing Director of Viju, (formerly CityIS) in the UK and across Europe. Wade moved to Seattle in 2004 and as President and CEO of CityIS, Inc. he established a new subsidiary business. Wade has won many sales recognition awards, including being ranked in the top 25 Deloitte & Touche “Fastest Growing UK Companies” four years consecutively and “Best Director” in national awards sponsored by Scottish Enterprise. Wade serves as volunteer Chairman for British American Business Connections, Pacific Northwest and is a Vice President of the Seattle Saracens Rugby Club.