Gentle Giant to arrange and provide transportation of several truckloads of goods and athletic equipment for the 8th annual high intensity race. 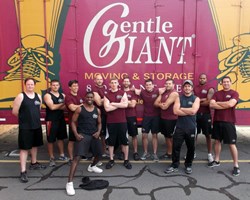 This event is a perfect fit for Gentle Giant Moving Company, as we have a highly athletic culture, love to compete, and spend every day running boxes throughout the city of Charlotte.

Charlotte moving company Gentle Giant, an award winning local and long distance mover based in Massachusetts with offices across the country, announced today that it will act as the official mover of the 2013 Thunder Road Marathon, put on by the organization Run Charlotte. Taking place on Saturday November 16th, the Thunder Road Marathon requires the transportation and storage of supplies, food, beverages, signage, and athletic equipment for approximately 5,000 participants and volunteers at the road race.Gentle Giant’s Charlotte move crews will play a pivotal role in pre-race and marathon day planning and logistics, working directly with Run Charlotte staff.

The scope of Gentle Giant’s work for the Thunder Road Marathon includes:

For this marathon, Gentle Giant Moving Company will provide approximately over 100 man hours, starting the Friday before the event, through to the end of race day, and days following the event.

Gentle Giant Charlotte Regional Manager Robert Farnum will serve as the project manager for the marathon. He explains that the “The Thunder Road Marathon is something we are looking forward to working on this year, and we hope to continue this partnership every year. This event is a perfect fit for Gentle Giant Moving Company, as we have a highly athletic culture, love to compete, and spend every day running boxes throughout the city of Charlotte!”

Across the country, Gentle Giant is involved with several other large athletic events, including the Seattle Marathon, the Rivertown Runners in new York, the Escape the Rock Duathlon in San Francisco, and have long standing partnerships with the Boston Marathon and Head Of The Charles Regatta.