Advocacy Group, A Just Cause, Questions Judicial Discretion in the Case of Former New England Patriot, Aaron Hernandez, and Draws Parallels to the IRP6 Case 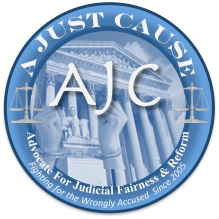 The advocacy group, A Just Cause, seeks reform to curb the power of the judiciary and end judicial immunity. “All officers of the court (judges, attorneys, court reporters) must be accountable, as much as any other citizen, to prevent abuse of power," says Sam Thurman, A Just Cause.

According to Canon 3 of the Code of Conduct of Unites States Judges, “A judge should perform the duties of the office fairly, impartially, and diligently.” Canon 3A(3) provides that “[a] judge should be patient, dignified, respectful, and courteous” to all persons “with whom the judge deals in an official capacity.” The Commentary of Canon 3A states that “[t]he duty to be respectful includes the responsibility to avoid comment or behavior that could be interpreted as harassment, prejudice or bias (http://www.uscourts.gov/RulesAndPolicies/CodesOfConduct/CodeConductUnitedStatesJudges.aspx).

“A Just Cause has observed numerous cases where judicial conduct has been questioned, and it makes one ponder if codes of conduct are being adhered to in many of the courts," asks Thurman. “In December 2014, The Judicial Qualifications Commission filed 13 charges of misconduct against a Muncie City Court judge (http://fox59.com/2014/12/11/muncie-city-judge-accused-of-abusing-her-powers-faces-13-misconduct-charges/). In November 2014, a Dauphin County magisterial district judge was formally charged with seven counts of judicial misconduct by the Judicial Conduct Board (http://www.thelegalintelligencer.com/id=1202676479895/Magisterial-District-Judge-Charged-With-Misconduct#ixzz3RHMRPMiB). And in September 2014 a judge in Philadelphia suddenly resigned and took a plea in a federal corruption case (http://www.abajournal.com/news/article/judge_suddenly_resigns_is_charged_by_feds_in_corruption_case). “Cases involving judges appears to be at all court levels, and it indicates that the American public should seek to support across-the-board judicial reforms," says Thurman.

“A Just Cause is also pushing an initiative for greater accountability regarding judicial discretion," says Thurman. According to news accounts in the murder trial of ex-NFL star, Aaron Hernandez, prosecutors questioned the judicial discretion of Superior Court Judge Susan Garsh when she refused to recuse herself (http://www.bostonglobe.com/metro/2013/10/21/bristol-prosecutors-ask-superior-court-judge-garsh-step-aside-aaron-hernandez-murder-trial/MEJxLgFOpbJNZTC7aICA3I/story.html). According to the Boston Globe, Judge Garsh denied a motion to recuse herself after two prosecutors, among them Assistant District Attorney William McCauley argued for her recusal due to perceived biases in previous cases (http://www.bostonglobe.com/metro/2013/10/21/bristol-prosecutors-ask-superior-court-judge-garsh-step-aside-aaron-hernandez-murder-trial/MEJxLgFOpbJNZTC7aICA3I/story.html).

According to the Boston Globe, “McCauley told Garsh that her prior rulings from the bench, her attitude toward him in front of jurors, and her unwarranted interruptions when he delivered his closing arguments in a 2010 trial showed she was 'unnecessarily antagonistic' against the prosecution.” McCauley was unsuccessful in his arguments since Judge Garsh, the subject of his request and also the decision maker remarked that she had no bias and was “free of any disabling prejudice.” (http://www.bostonglobe.com/metro/2013/10/21/bristol-prosecutors-ask-superior-court-judge-garsh-step-aside-aaron-hernandez-murder-trial/MEJxLgFOpbJNZTC7aICA3I/story.html)

“It was reported that the judge warned the mother of the alleged victim to not show emotion during the trial," states Thurman. According to the Boston Globe, during the Hernandez trial Judge Garsh told the murder victim's mother not to cry during her testimony, on Wednesday, February 4th (http://www.bostonglobe.com/metro/2015/02/04/girlfriend-victim-resume-testimony-trial-aaron-hernandez/RLue4UaOxp0R2LSLhrkvZL/story.html). The Boston Globe reported that Superior Court Judge Susan Garsh warned Ursula Ward (mother of alleged murder victim Odin Lloyd) that when the jury returned to the courtroom, “Maintain control of your emotions. You are not to cry.” According to the Associated Press, the judge’s warnings to Ms. Ward came after Ms. Ward left the courtroom in tears on two previous days after seeing photos of her son’s body. (http://news.yahoo.com/girlfriend-slain-man-hernandez-often-smoked-pot-together-160320381.html)

“Canon 3 of the code of conduct for judges states that a judge has a responsibility to avoid comment or behavior that could be interpreted as harassment, prejudice or bias," recalls Thurman. “One questions what constitutes a violation of Canon 3," ponders Thurman. Political Analyst Jon Keller stated, “I have never seen a judge deliver such a warning (referring to warnings to Ms. Ward)” (http://boston.cbslocal.com/2015/02/05/keller-large-hernandez-trial-judge-should-explain-herself/). According to the CBS news report, in an interview with the Boston Globe, former Middlesex County DA Gerry Leone comment, “The only time that could reasonably be done was if a judge believed a witness might be grandstanding to manipulate jurors.” (http://boston.cbslocal.com/2015/02/05/keller-large-hernandez-trial-judge-should-explain-herself/)

According to 28 USC § 455 (a), “Any justice, judge, or magistrate judge of the United States shall disqualify himself in any proceeding in which his impartiality might reasonably be questioned.” (28 USC § 455 - Disqualification of justice, judge, or magistrate judge). “This case bears a striking resemblance to the federal criminal case of IRP Solutions Corporation, where Federal Judge Christine M. Arguello refused to recuse herself," recalls Thurman.

“When it comes to the Hernandez case, the IRP6 case, and cases like it, it points to a systemic problem with the process, says Thurman. “The problem with this process is that judges make the determination as to recuse or not. A Just Cause is working with legislators to initiate reforms proposing that an independent party be engaged to make decisions on motions to recuse," adds Thurman.

“The appearance of impropriety is a canon that advocacy groups examine when reviewing cases”, says Thurman. Court records show that prior to commencement of trial, David Banks (IRP6), Chief Operating Officer for IRP Solutions filed a pro se motion requesting that Judge Christine M. Arguello recuse herself on the argument of a personal relationship between Judge Arguello and Holland and Hart attorney Greg Goldberg. Court records show that on March 8, 2004, Greg Goldberg hand-delivered a letter to Assistant U.S. Attorney Matthew Kirsch requesting that IRP executives be criminally charged and articulated what statutes they should be prosecuted under (D. Ct. No. 1:09-CR-00266-CMA). Court records also show that Judge Arguello denied the motion to recuse herself stating that she did not know Mr. Goldberg that well (D. Ct. No. 1:09-CR-00266-CMA). “A Denver Post article presented a contradictory view of the relationship between Judge Arguello and Mr. Goldberg”, argues Banks. The Denver Post quoted Greg Goldberg in a congratulatory statement as saying, "I know Christine Arguello...well..." (The Denver Post September 9. 2008, http://www.denverpost.com/news/ci_10414150).

“Considering the outcome of the IRP6 case in district court, one might note that not only did Judge Arguello refuse to recuse herself from the federal criminal case against IRP Solutions, but the IRP6 felt strongly enough about actions in the courtroom that a complaint was filed on the bases of judicial bias and lack of impartiality on the part of the judge. The complaint of Judicial Misconduct filed against Judge Arguello by A Just Cause on behalf of IRP6 questioned adherence to Canon 3A. Records show that the IRP6 went on the record arguing precepts of Canon 3 related to impatience, respect and courtesy (Complaint of Judicial Misconduct August 27, 2014).

“In both the Hernandez and IRP6 cases, transcripts and court records show that motions were presented arguing judicial bias or impartiality," states Thurman (IRP: D. Ct. No. 1:09-CR-00266-CMA. Hernandez: (http://www.bostonglobe.com/metro/2013/10/21/bristol-prosecutors-ask-superior-court-judge-garsh-step-aside-aaron-hernandez-murder-trial/MEJxLgFOpbJNZTC7aICA3I/story.html). “This supports an argument for an outside party to investigate judges’ conduct, as well as review and decide recusal requests in a more equitable manner. Judges have the special responsibility to conduct themselves in accordance with the Code of Conduct for United States Judges at all times, while administering justice and fairness. One begs to question how perverse is our judiciary if they’re not held accountable for their lack of integrity and impartiality?” Thurman expounds.

“We don’t know how the Hernandez case will conclude, but we do know that the IRP6 case still has several unanswered questions," argues Thurman. Court records show that the IRP6 argued for, but were denied transcripts of a sidebar conference containing details of an exchange where the IRP6 contend there was a Fifth Amendment violation (D. Ct. No. 1:09-CR-00266-CMA). “Judge R. Brooke Jackson presided over a civil lawsuit filed by A Just Cause on behalf of the IRP6 but the case was dismissed and Judge Arguello was still not compelled to produce the 'missing' transcripts,” exclaims Thurman. “Judge Jackson even explained to the government that he was not going to 'use the law to dismiss' the civil suit, and he acknowledged that something was missing from the record, but case got dismissed just the same," states Thurman. “The IRP6 case has several irregularities and they all provide a foundation for review of this case. A Just Cause is currently tracking several requests with the Department of Justice to launch an inquiry in the IRP6 case. Actions recorded in the IRP6 case and several actions so far in the Hernandez case raise questions on the need for serious dialogue about judicial reform,” concludes Thurman.

A Just Cause (AJC) continues its advocacy and review of court records for the six Colorado information technology executives known as the "IRP6" (David A. Banks, Kendrick Barnes, David A. Zirpolo, Gary L. Walker, Clinton A. Stewart and Demetrius K. Harper).

For additional information on IRP Solutions and the City of Philadelphia, go to http://www.freetheirp6.org

For blog posts by David Banks (IRP6) go to http://www.freetheirp6.org/#!stand-up-blog/ci23